25 December 2012
The head of the United Nations Educational, Scientific and Cultural Organization (UNESCO) has called on the international community to act urgently to protect Mali's cultural heritage after the latest wave of destruction at Timbuktu.

“I am profoundly shocked by the ferocity that has marked the latest round of destruction of Timbuktu's mausoleums,” said UNESCO Director-General Irina Bokova.

At least three mausoleums in Mali were reportedly destroyed on 23 December, including that of the Al Hassan and Al Houseyni twins, the agency said in a news release.

Ms. Bokova reiterated UNESCO's commitment to stand by the people of Mali, made after the first wave of destruction last July, when the mausoleums of Sidi Mahmoud, Sidi Mokhtar and Alpha Moya in Timbuktu were attacked.

Two emergency missions were subsequently carried out to assess damage, and the UN World Heritage Committee adopted a resolution to create an emergency fund for the rehabilitation and safeguarding of Mali's cultural heritage.

“I call on the whole of the international community to act, as a matter of urgency, and take the measures necessary to guarantee the protection of this heritage, which is such an important part of Mali's cultural identity, and of humanity's history,” said Ms. Bokova.

“Such wanton destruction on these inestimable treasures is a crime against the people of Mali, who have always shown great tolerance towards different religious and spiritual beliefs and practices.”

According to UNESCO, Timbuktu was an intellectual and spiritual capital and a centre for the propagation of Islam throughout Africa in the 15th and 16th centuries.

The renewed clashes in the north, as well as the proliferation of armed groups in the region, drought and political instability in the wake of a military coup d'état in March have uprooted hundreds of thousands of civilians this year. Over 412,000 people have been forced to flee northern Mali, and an estimated five million people have been affected by the conflict. 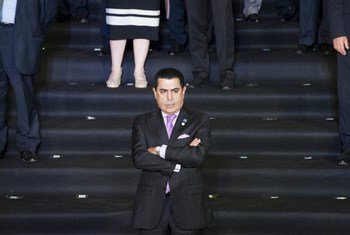 2 July 2012
The President of the General Assembly, Nassir Abdulaziz Al-Nasser, today condemned the attacks which have damaged historic mausoleums in northern Mali.