UNESCO/F. Bandarin
The rehabilitation of the cultural heritage of Timbuktu is crucial for the people of Mali, for the city’s residents and for the world.

14 March 2014
Local masons in Timbuktu today started to lay down the first earthen bricks to reconstruct World Heritage mausoleums damaged when radical Islamists occupied the northern part of the country in 2012.

“The rehabilitation of the cultural heritage of Timbuktu is crucial for the people of Mali, for the city’s residents and for the world,” said Irina Bokova, Director-General of the UN Educational, Scientific and Cultural Organization (UNESCO), marking today’s ceremony.

“The very name Timbuktu sparks the imagination of millions of people in all parts of the planet,” she added.

Timbuktu was an economic, intellectual and spiritual capital and a centre for the propagation of Islam throughout Africa during the city’s golden age in the 15th and 16th centuries. According to UNESCO, the three mosques and the sixteen mausoleums comprising the property are part of the former great city of Timbuktu that once numbered 100,000 inhabitants.

The reconstruction of the mausoleums is being carried out by Malian masons under the supervision of Imam of Djingareyber.

The reconstruction, financed by Malian authorities and UNESCO, with contributions from Andorra, the Kingdom of Bahrain, Croatia and Mauritius, as well as logistical support from the UN Multidimensional Integrated Stabilization Mission in Mali (MINUSMA), is expected to last one month.

“Today’s start of the reconstruction of Timbuktu’s mausoleums is important as they constitute an inalienable feature of the city’s identity whose very purpose is to protect its inhabitants,” said Albert Gerard Koenders, the Special Representative of the Secretary-General and head of MINUSMA.

The fighting also destroyed parts of the Djingareyber Mosque, one of three madrassas comprising the University of Timbuktu. It is believed to have been built around 1327, mostly out of straw and wood with some limestone reinforcements.

The emblematic El Farouk independence monument in the shape of a horse at the entrance to the city was also razed. 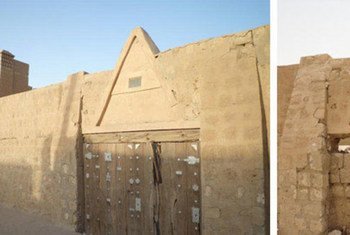 7 June 2013
Damage to Timbuktu’s cultural heritage due to fighting between Government forces and Tuareg rebels is more extensive than first estimated, a United Nations-led team said today following an assessment of the fabled city.