UNHCR/H. Caux
A Malian refugee woman in Mangaize, northern Niger. Many Malians have fled to neighbouring countries because of the general insecurity and humanitarian situation in the country's north.
22 December 2012

Secretary-General Ban Ki-moon has urged all actors in Mali to swiftly finalize and implement a transitional roadmap leading to elections in order to bring the crisis in the country, and the suffering of its people, to an end.

Mr. Ban did so during a meeting on Friday evening at United Nations Headquarters with the Foreign Minister of Mali, Tiéman Coulibaly, one day after the Security Council authorized the deployment of an African-led intervention force to assist the authorities in recovering rebel-held regions in the north and restoring the unity of the country.

The two men discussed the serious crisis in the country and how the UN can best support Mali in restoring its democracy and territorial integrity, and to bring an end to the growing suffering of the Malian people, the Secretary-General's spokesperson said in a read-out.

The renewed clashes in the north, as well as the proliferation of armed groups in the region, drought and political instability in the wake of a military coup d'état in March have uprooted hundreds of thousands of civilians this year. Over 412,000 people have been forced to flee northern Mali, and an estimated five million people have been affected by the conflict.

Mr. Ban expressed his determination to strengthen his collaboration with the Malian authorities and international partners in the implementation of the Council resolution that authorized the force.

He urged all actors in Mali to swiftly finalize and implement a transitional roadmap leading to the holding of free, fair and transparent elections as soon as possible.

The Secretary-General and the Foreign Minister also exchanged views on the establishment of a UN multidisciplinary office in the capital, Bamako. 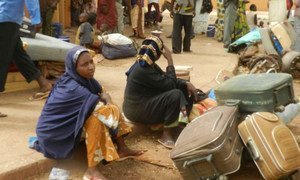