UN Photo/Isaac Billy
UN Police at the UN Mission in South Sudan (UNMISS) lead a security sweep of the grounds at the UN House in Juba, currently serving as a camp for internally displaced persons (IDPs) escaping the ongoing violence throughout the country.

15 April 2014
The number of people seeking shelter at the United Nations Mission in South Sudan (UNMISS) base in the Unity state capital, Bentiu, has doubled over the past few days, UN Humanitarian Coordinator Toby Lanzer said in Juba today.

The number of people seeking shelter at the United Nations Mission in South Sudan (UNMISS) base in the Unity state capital, Bentiu, has doubled over the past few days, UN Humanitarian Coordinator Toby Lanzer said in Juba today.

“We think we now have at least 9,000 people inside our base there,” Mr. Lanzer told a press conference, noting that this was up from 4,500 displaced people at the base two weeks ago.

Mr. Lanzer said he felt “a certain sense of outrage”, as UNMISS, UN agencies and other aid agencies made efforts to deal with immediate consequences of the ongoing violence. “If [the violence] isn't stopped, South Sudan will again have a massive need [for] aid,” he said, urging the warring parties to end the fighting for the benefit of the people of the country.

“There is allegedly a Cessation of Hostilities (agreement), but the incidents of Bentiu just show that it is not real,” he said. “It is really an outrage for the people…who if left in peace, will contribute so much to the development of this country.”

UNMISS has sent a patrol of peacekeepers to protect civilians seeking shelter in Bentiu Hospital, said Mr. Lanzer, who is also Deputy Special Representative of the Secretary-General. This was done to avoid a repeat of incidents in Malakal Hospital in Upper Nile state, where innocent civilians were reportedly killed by fighting forces, he added.

Mr. Lanzer, who also serves as UN Development Programme (UNDP) Resident Representative, said it will take “compassion, humility and a new way of thinking” for the country to achieve peace, which would enable it to become a “viable state”.

He said the vital challenge for South Sudan must be to achieve economic prosperity, rather than have people “just trying to stay alive”. He commended progress made in stable states like Western Equatoria.

Mr. Lanzer highlighted re-establishment of a UNDP initiative in which 35 civil servants from Inter-governmental Authority on Development (IGAD) member States had returned to South Sudan (after fleeing the fighting) to support nation-building through collaboration with the country’s civil service.

He also noted that UNDP was putting together a livelihoods project aimed at empowering displaced people living on UN bases.

“I am really pleased that the National Platform for Peace and Reconciliation was launched on 5 April,” said Mr. Lanzer. “It aims to supplement talks in Addis, to give a voice to women, civil society groups and others who have every right to have their voice heard.”

He revealed UNICEF, the UN Educational, Scientific and Cultural Organization (UNESCO) and the Ministry of Education are working together to put in place nationally recognized “Education in Emergency” certificates. He lauded work done by the UNMISS Japanese Engineering Contingent and UNDP to complete and open a new law faculty building at Juba University.

However, humanitarians faced huge challenges in helping over 70,000 civilians at UN bases, 700,000 others displaced outside and seven million at the risk of severe hunger, the Humanitarian Coordinator said.

He cited limited resources, with only 36 per cent of $1.27 billion funding required for crisis response raised, as well as continuing violence, interference with aid operations and coming rains.

“We are doing an awful lot, but we can never do enough and we shouldn’t be called on to do everything,” said Mr. Lanzer. “This is the responsibility of the leaders of South Sudan … It is only the leaders and the people of South Sudan who can reconcile their differences and who eventually can build their own country.”

Meanwhile, the UN refugee agency (UNHCR) announced today that it has begun airlifts and construction of new camps to help South Sudanese refugees fleeing to Ethiopia, who now total more than 95,000 and are growing at up to 1,000 a day.

She said the first flight in an airlift of 4,000 emergency tents arrived yesterday at Gambella airport. Those 400 tents were being sent to Lietchuor refugee camp, 125 kilometres from Gambella town today.

UNHCR has now finished relocating refugees who were living in flood-prone areas in Kule camp, 42 kilometres from Gambella town, to higher ground. A similar relocation will start at Leitchuor camp on Tuesday. With the rainy season approaching, some parts of the camps were already affected by flooding. 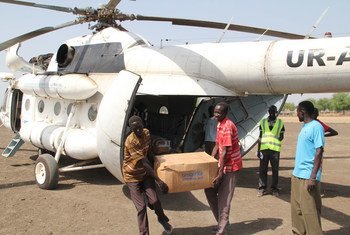 12 April 2014
Expressing deep concern about the crisis in South Sudan and its impact on civilians, the top United Nations humanitarian official joined today with her counterparts from the United States and the European Union to urge more support for the war-torn country's people, who have been severely affected by conflict, displacement and food insecurity.