UNICEF/2014/Elder
With the rainy season looming, UN agencies are racing against time to deliver emergency aid to South Sudan.

12 April 2014
Expressing deep concern about the crisis in South Sudan and its impact on civilians, the top United Nations humanitarian official joined today with her counterparts from the United States and the European Union to urge more support for the war-torn country's people, who have been severely affected by conflict, displacement and food insecurity.

Expressing deep concern about the crisis in South Sudan and its impact on civilians, the top United Nations humanitarian official joined today with her counterparts from the United States and the European Union to urge more support for the war-torn country's people, who have been severely affected by conflict, displacement and food insecurity.

“We are here today to sound the alarm for South Sudan,” said Valerie Amos, head of the UN Office for the Coordination of Humanitarian Affairs (OCHA), who co-chaired a Humanitarian Ministerial Meeting in Washington, D.C., with Rajiv Shah, Administrator of the United States Agency for International Development (USAID), and Kristalina Georgieva, European Union (EU) Commissioner for International Cooperation, Humanitarian Aid and Crisis Response.

“The effects of the conflict are significant– millions of people have been affected, cities have been destroyed, the economy has collapsed and food production has been devastated,” said Ms. Amos in a joint press release, urging international action to end the crisis, which began in December 2013 when fighting broke out between Government and opposition forces, triggering massive population displacement.

“We fear a serious food and nutrition crisis in the next few months if the situation doesn't improve soon,” she added.

With the rainy season fast approaching, aid agencies expect conditions will deteriorate rapidly. Malnutrition rates and the risk of diseases such as cholera and malaria are already extremely high, especially among displaced people.

The leaders issued a Call for Action on South Sudan urging immediate action on three critical fronts. They urged an end to the fighting, underscored the need for humanitarian funding over the next three months to help people cope with the crisis, and demanded that all parties to the conflict respect the South Sudanese people and abide by international humanitarian law.

“This declaration is a wake-up call to prevent a deeper catastrophe from unfolding in South Sudan,” said Dr. Shah. “Today, indicators tell us that South Sudan is on the brink of famine, and it's clear that the world must now do more to address this crisis.”

"We all celebrated with the world's newest nation when South Sudan became independent,” said Ms. Georgieva, who stressed however than less than three years later, the world was witnessing a humanitarian disaster of appalling proportions.

“It is innocent civilians who are paying the highest price for what has happened. We need to stand by them, while doing everything we can to get their leaders to put an end to a conflict that is wrecking lives and livelihoods across South Sudan, she declared.

This is the second allocation from the Central Emergency Response Fund (CERF) to South Sudan in 2014, bringing the total CERF funding to the crisis this year to $30.3 million.

The CERF funds will go to the most critical relief projects including vaccination and nutrition programmes and food distribution. UN agencies and humanitarian partners need over $1.2 billion for aid efforts this year but have only received 36 per cent-$462 million - of the funding so far.

Almost 5 million people are in need of immediate humanitarian assistance in South Sudan including over 800,000 people who are internally displaced. Some 280,000 South Sudanese are also seeking refuge in neighbouring countries; CERF has provided funding to address humanitarian needs in Ethiopia, Kenya, Sudan and Uganda.

Today, the senior humanitarian officials underscored that millions more are already at risk of severe food insecurity. Conflict and a funding gap of nearly $800 million continue to affect emergency aid efforts. As the rainy season looms, UN agencies and humanitarian partners warn that heavy rains and flooding could put a serious strain on their operations and further limit their access to people in need.

The United States is the leading donor of humanitarian assistance to South Sudan and on 25 March announced an additional $83 million in assistance. With this new funding, the US Government is providing more than $411 million in 2013 and 2014 to date to help those affected by the crisis.

The European Commission today announced that it will be boosting its life-saving assistance by $62 million, making its total contribution for this year $131 million. 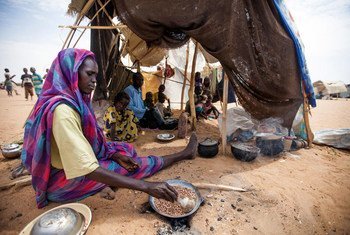 10 April 2014
The United Nations Food and Agriculture Organization (FAO) today called for urgent support for farmers and herders in Sudan in order to help prevent a further worsening of the food security situation in the country.