21 March 2014
Amid tit-for-tat attacks between locals and refugees sparked by food shortages in an area of South Sudan's volatile Upper Nile state, the United Nations refugee agency said today that it is gravely concerned about new tensions rising in the region.

“Local residents [in Maban County] are now demanding that the some 60,000 refugees in Yusuf Batil and Gendrassa camps leave within two months,” Fatoumata Lejeune-Kaba, a spokesperson for the UN High Commissioner for Refugees (UNHCR), told journalists in Geneva, adding that hostilities have also spread to Doro and Kaya camps.

While stressing that UNHCR is working with authorities and other humanitarian agencies to diffuse the tensions, she explained that competition for natural resources – including firewood, grass and grazing land – has recently boiled over into “tit-for-tat” attacks, forcing up to 8,000 refugees to flee Yusuf Batil camp.

“Houses, tents and granaries belonging to refugees and villagers alike were set on fire during the fighting. Although refugees have since returned to the camp, tensions persist. Maban residents living near Yusuf Batil camp have fled, citing fear of further confrontation with refugees who outnumber them,” Ms. Lejeune-Kaba said.

According to UNHCR, since armed conflict between Government and rebel forces broke out in South Sudan in mid-December, instability and conflict in the region have disrupted planting and harvesting. At the same time, insecurity along transportation routes has hampered the delivery of food and other humanitarian supplies.

During the first week of March, refugees across Maban's four camps received a 10-day ration of pulses and oil. Pulses and oil cover only 24 per cent of the daily energy needs of 2,100 kcal. Shortages have left them without cereals and salt for several weeks. In addition, some key non-food items, including fuel and medicine, are running out.

“There is a need to ensure adequate supplies are in place before the onset of the rains or else all deliveries will have to be undertaken by air,” stressed Ms. Lejeune-Kaba. “Without enough to eat, refugees have been growing restless. Some have threatened to return to Sudan's Blue Nile state, which they fled because of continuing armed conflict,” she noted.

Maban County hosts 125,000 Sudanese refugees from Blue Nile. A third of the refugee population is made up of small children, pregnant and lactating women, elderly and disabled people and the chronically ill. And they are the ones most vulnerable to malnutrition, says UNHCR.

The Governments of South Sudan and of Ethiopia have agreed to allow humanitarian supplies through Gambella, Ethiopia, which will enable the UN World Food Programme (WFP) to dispatch much needed food commodities for internally displaced people and refugees in Maban in the coming days.

Meanwhile, the insecurity and hunger are forcing more South Sudanese to flee into neighbouring countries such as Ethiopia, where an average of 1,000 South Sudanese refugees arrive daily. The refugees, mainly women and children, have been arriving in the Gambella region from Upper Nile and Jonglei states.

The Government had made land available for two new camps in Gambella – Leitchuor camp opened in mid-January and Kule in late February. But Leitchuor, with 30,000 people, has exceeded its capacity, and Kule is fast approaching its limit of 20,000.

The refugees still face challenges, including serious health concerns. Many arrive malnourished. “With WFP and UNICEF, we have established feeding programmes to support their recovery,” said the UNHCR spokesperson.

Also speaking to the press, WFP spokesperson Elisabeth Byrs added that the agency is doing everything possible to resupply the food stocks in the Maban County refugee camp “as fast it can.” She added that WFP is grateful to the Governments of South Sudan and Ethiopia for their decision to allow cross-border food shipments to resume. “This should help re-establish the critical humanitarian life line for thousands of the displaced,” she said. 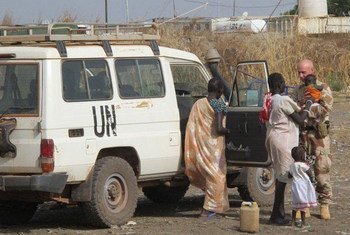 18 March 2014
As the Security Council prepares to discuss the situation in South Sudan today in New York, the United Nations mission on the ground is reporting fighting between Government and opposition forces in the town of Malakal in Upper Nile state.