UNMISS
Displaced people from the UNMISS County Support Base (CSB) in Pariang, Unity State, South Sudan, being relocated to Bentiu.

18 March 2014
As the Security Council prepares to discuss the situation in South Sudan today in New York, the United Nations mission on the ground is reporting fighting between Government and opposition forces in the town of Malakal in Upper Nile state.

The United Nations peacekeeping chief today called on the parties in South Sudan to respect the cessation of hostilities agreement they signed two months ago, amid reports of fighting between Government and opposition forces on the ground.

“The security and humanitarian situation in South Sudan will continue to deteriorate until the parties fully engage in the political talks, respect the cessation of hostilities and allow freedom of movement for the United Nations and its partners,” Under-Secretary-General for Peacekeeping Operations Hervé Ladsous said as he briefed the Security Council.

“Both parties continue to prioritize the pursuit of military gains over talks towards a comprehensive political settlement. The crisis has already affected the security of the region. The longer it goes on, the more chances for further regional intervention will grow.”

The comments by Mr. Ladsous come as the UN Mission in South Sudan (UNMISS) reported fighting between Government and opposition forces in the town of Malakal in Upper Nile state. Two tank shells exploded about 200 metres from the Mission’s compound last evening, wounding a displaced civilian sheltering at the protection site. Sporadic arms fire and artillery shell explosions were also heard yesterday, also not far away from the compound.

UNMISS reiterated the importance for both parties to fully comply with the cessation of hostilities agreement that was signed in January and which aims to stem the conflict that began in mid-December. The crisis in the world’s youngest nation has uprooted over 700,000 people from their homes, including 77,000 who are seeking refuge at UNMISS bases.

The Mission also stressed that both parties to the conflict must respect the inviolability of UN premises and facilities, as well as the life-saving work that the world body is doing on the ground.

In his briefing, Mr. Ladsous noted that UNMISS was deployed to help South Sudan transform into a democratic State and to assist its leadership deliver long awaited peace and independence dividends to its citizens.

“Today, the leadership stands divided, its security institutions are fragmented and the society is victimized by communal tensions. Under these conditions, and as discussed with this Council, the initial raison d'être of UNMISS no longer applies,” he said.

Therefore, as stated by Secretary-General Ban Ki-moon in his latest report on South Sudan, the situation necessitates a “strategic shift” in UNMISS’ posture, he noted. Accordingly, the UN will temporarily put on hold activities dedicated to the extension of State authority and focus on five main priorities, including the protection of civilians, the facilitation of humanitarian assistance, and human rights monitoring and reporting.

“This new posture of the Mission will remain in place until the parties finalize a comprehensive political agreement,” stated Mr. Ladsous, adding that, once this happens, a more comprehensive review of UNMISS’ mandate, posture and capabilities will be carried out.

As part of ongoing efforts by the UN and its partners to assist those in need, the World Food Programme (WFP) has started a series of airdrops of food assistance to remote areas of the country.

Two rounds of airdrops today delivered enough cereals for about 8,000 displaced people for about 15 days in the town of Ganyiel in Unity state, the agency said in a news release. Airdrops are planned for nine locations in Upper Nile, Jonglei and Unity states, and may be expanded to reach other areas.

“We are in a race against time to get assistance to people who are in critical need in places we simply haven’t been able to reach by road or river,” said WFP Country Director Chris Nikoi.

“Given the level of the conflict, we have known for some time that we would have to move some food by air to some parts of the country, particularly during the rainy season, but we have faced more difficulties than envisioned and now need to deliver more food by air than planned.”

Insecurity, border restrictions and other barriers to humanitarian access are causing serious problems for WFP moving food into and around the country at a time when the agency is urgently trying to deliver food assistance to hundreds of thousands of people in need, as well as to pre-position food before the rainy season makes more than half the country inaccessible by road.

Working closely with the UN High Commissioner for Refugees (UNHCR), it is also supporting a rapidly growing number of South Sudanese refugees who have fled to neighbouring countries. More than 210,000 refugees from South Sudan have arrived in Ethiopia, Kenya, Uganda and Sudan since the crisis began.

“While we are working with partners to provide specialized nutritious foods for refugee children, the high levels of malnutrition are a sign that the humanitarian situation in inaccessible regions of South Sudan may be rapidly deteriorating.” 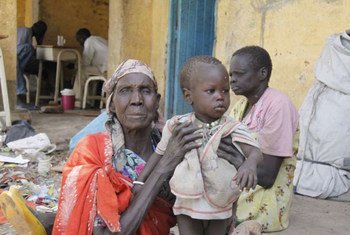 7 March 2014
The United Nations refugee agency today expressed its deep concern about the situation in South Sudan’s Upper Nile state, where needy populations, including refugees, internally displaced persons (IDPs) and, increasingly, host communities are being affected as security conditions have prevented the delivery of food and other relief items to several camps since February.