UNICEF/South Sudan/2014/Porter
UNICEF is working to stave off disaster in South Sudan, less than three years after the world’s youngest nation gained independence.

4 March 2014
Outbreaks of fresh fighting in South Sudan is likely to displace tens of thousands of additional people and is hampering efforts to help children in need, warns the United Nations Children’s Fund (UNICEF).

“We are working to stave off disaster,” said Ted Chaiban, UNICEF’s Director of Emergency Programmes. “People are continuing to flee their homes in the face of fierce fighting and terrible violence.”

Nearly 900,000 people – half of them children – have already been forced from their homes as a result of the recent conflict in South Sudan, which achieved its independence in July 2011 after seceding from Sudan.

“South Sudan’s dream risks becoming a nightmare for the country’s children,” Mr. Chaiban warned in a news release issued in the capital, Juba.

UNICEF noted that, despite the signing of an agreement to cease hostilities at the end of January, fighting between Government and opposition forces has increased in recent weeks.

Following heavy clashes and reports of people being killed in churches and hospitals in the northern town of Malakal in February, fighting has spread further north in Upper Nile state. There are now fears that 30,000 or more civilians may be freshly displaced.

“Already there are hundreds of thousands of women, children and men with limited access to safe drinking water, sanitation, nutrition and shelter,” said Mr. Chaiban. “Under such conditions, children are especially vulnerable to disease outbreaks and severe food insecurity.”

The continued violence in South Sudan has massively disrupted livelihoods as families and livestock have been displaced, households looted and markets destroyed, with regular aid interrupted, putting more than 3.7 million people at risk of severe food insecurity as well as disease outbreaks and acute malnutrition.

There are widespread reports of grave violations of humanitarian law, with the effects of the conflict on children particularly devastating, said UNICEF. Over the past two months, girls and boys have been killed, maimed, raped, orphaned, recruited into armed groups, and made homeless.

Mr. Chaiban said UNICEF staff have personally witnessed the aftermath of atrocities, and stressed that there can be no excuse or justification for this violence.

“Children and civilians should be protected under international law, but as the violence continues, we see further outrages.”

UNICEF is taking advantage of periods of relative stability to reach the displaced in different parts of the country with fresh water and sanitation as well as health and nutrition services. It is also tracing children who have become separated from their families and providing psychosocial support where possible.

In addition, the agency is making provisions in areas where there are large groups of displaced families for basic education facilities, a vital step for children whose lives have been so traumatically disrupted.

Meanwhile, the UN Mission in South Sudan (UNMISS) said one of its patrols in Malakal observed large movements of civilians on Sunday across the River Nile, reportedly due to fighting in Lelo.

Also, the Mission has received reports that Wau Shilluk in Upper Nile state has been re-taken by the Sudan People’s Liberation Army (SPLA).

The Mission continues to protect some 75,000 civilians at various sites across the country. 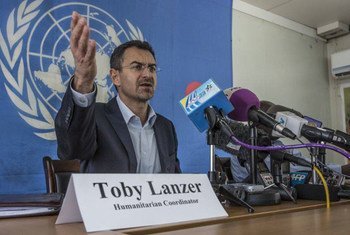 27 February 2014
The top United Nations humanitarian official in South Sudan described as “shocking” what he saw during a visit to a teaching hospital in the town of Malakal, where he encountered nothing but dead bodies.