UNHCR/A. Greco
A displaced Central African Republic (CAR) woman ponders her situation in the shelter of a church in Boali, a town north of the capital Bangui.

4 March 2014
The United Nations refugee agency today appealed for increased support to meet the needs of people fleeing the crises in the Central African Republic (CAR) and South Sudan, especially those who have arrived in Chad, Cameroon and Ethiopia.

“We are appealing to our partners and the Governments in these countries to help speed support to these populations – which although still relatively small in number are nonetheless in urgent need of assistance,” said Melissa Fleming, spokesperson for the UN High Commissioner for Refugees (UNHCR).

She told a news conference in Geneva that the crises in South Sudan and CAR have caused one of the biggest refugee and IDP [internally displaced person] situations Africa has seen in recent years, having together forcibly displaced some 1.8 million people across a region with very sparse support capacities.

Within South Sudan, there are currently over 739,000 people who are internally displaced and a further 196,921 sheltering in neighbouring countries, according to UNHCR. It is estimated that by June as many as 3.2 million people could be in need of humanitarian help. Food security is already a problem.

“In Chad, Cameroon, Ethiopia and other locations where refugees are arriving, the help effort for refugees arriving from these conflicts urgently needs stepping up,” Ms. Fleming stated, noting that the increasing numbers of new arrivals are outpacing available humanitarian resources. Among the most pressing needs are food, clean water, shelter and sanitation.

Meanwhile, funding for both the CAR and South Sudan emergencies remains “far below needs.”

Also highlighting the growing needs of CAR refugees in Chad was the Office for the Coordination of Humanitarian Affairs (OCHA), which urged greater resources to assist the mostly women and children who fled their homes with few or no belongings.

Thomas Gurtner, UN Humanitarian Coordinator in Chad, noted that many of the refugees are injured, traumatized, ill or malnourished, and there are almost 1,000 children who are unaccompanied or separated from their family.

“The world needs to take notice of this human tragedy,” said Mr. Gurtner.

“The Government of Chad, UN agencies and humanitarian partners are doing all they can. But all actors are stretched to their limits and lack resources. Only more funding will allow us to cover the most urgent humanitarian needs.”

The World Food Programme (WFP), its spokesperson Elisabeth Byrs said, has planned to assist 150,000 people in Chad under a new emergency operation over a six-month period. As part of that initiative, WFP will provide assistance in food and vouchers to newly arrived people from CAR. Some 50,000 people in transit centres will be targeted through in-kind food distribution, and another 100,000 will receive food vouchers. 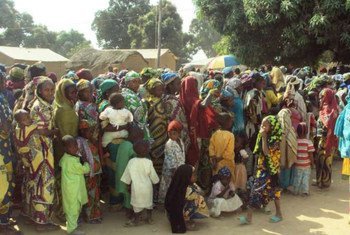 21 February 2014
Almost 20,000 people from the Central African Republic (CAR) have crossed into Cameroon since the beginning of February to escape the ongoing violence in their homeland, the United Nations refugee agency reported today.