The top United Nations humanitarian official in South Sudan described as “shocking” what he saw during a visit to a teaching hospital in the town of Malakal, where he encountered nothing but dead bodies.

The top United Nations humanitarian official in South Sudan described as “shocking” what he saw during a visit to a teaching hospital in the town of Malakal, where he encountered nothing but dead bodies.

“Last week it was a functioning centre to treat the sick; now it’s an empty, silent shell,” UN Humanitarian Coordinator Toby Lanzer tweeted after visiting the hospital with a delegation that included representatives of the World Health Organization (WHO), adding “nothing left except dead bodies.”

Malakal itself looked and felt deserted, added Mr. Lanzer, who also serves as Deputy Special Representative of the Secretary-General for South Sudan.

The visit, which follows the latest attack on the Upper Nile state capital, was aimed at assessing the situation of people displaced by the violence that has plagued the world’s youngest nation in recent months.

“It is sad and indescribable to witness that kind of situation and it is also sad to see a town which was alive and busy deserted and turned to a ghost town,” Mr. Lanzer stated.

In addition to the hospital, the delegation visited Christ the King Church, where more than 800 internally displaced persons (IDPs) sought refuge before being transferred to the compound in Malakal of the UN Mission in South Sudan (UNMISS), which is protecting some 22,000 civilians.

More than 50,000 other people are seeking refuge at UN bases throughout the country after violence flared up in mid-December between forces loyal to President Salva Kiir and former deputy president Riek Machar.

Today, Mr. Lanzer visited the town of Bor in Jonglei state, where he said there were four mass graves and the business district had been completely destroyed. With a few civilians on the streets and some civil servants working, there were signs of some trade activity, he noted.

Mr. Lanzer added that an estimated 1,200 people were leaving Jonglei every day for Minkaman, Awerial County in Lakes state.

Also voicing deep concern at the grave humanitarian situation in the country was Under-Secretary-General for Humanitarian Affairs and UN Emergency Relief Coordinator Valerie Amos, who said that despite the recent ceasefire agreement, the lives of millions of civilians are threatened by lack of food, outbreaks of disease, and continued violence.

“All those who continue fighting in South Sudan must abide by their obligations under international humanitarian and human rights laws: to protect civilians, to respect the ceasefire, to stop targeting civilian facilities, and to allow safe access for aid workers,” she said in a statement.

“The people of South Sudan want peace and stability and they want this conflict to end. I hope the fighters will put the people first and stop the unspeakable violence being meted out to ordinary women, children and men.” 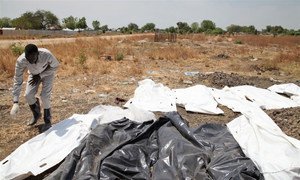 The South Sudanese city of Malakal is looted and burned, with more than 100 bodies scattered along the route, United Nations peacekeepers in the country reported today.