4 March 2014
How countries plan, build and manage their cities today will determine the outcome of global efforts to achieve a sustainable future, a panel of United Nations and civil society experts said today, calling on the international community to “get cities right” so the impacts of rapid urbanization can be better managed and sustainable development for all can be achieved.

“We need a platform for profound debate about the challenges we have in front of us,” said Joan Clos, Executive Director of the UN Human Settlements Programme (UN-Habitat), previewing The City We Need, a document outlining the vision of a city for the 21st century and which also aims to draw attention to the links between urbanization and major global development challenges such as climate change and grinding poverty.

Launching the document at a Headquarters press conference, Mr. Clos was joined by Nicholas You, Chair of the Steering Committee of the World Urban Campaign, Professor Eugenie Birch, co-director of the Penn institute for Urban Research, and Mr. Jocking Arputham, President and Founder of Slum Dwellers International.

The City We Need is a booklet of nine principles that can be implemented in order to achieve sustainable urban development. It is conceived, designed and written by the members of the World Urban Campaign. “It represents the aspiration of the new model of urbanization that is needed in the future,” said Mr. Clos, who emphasized: “We need a more socially inclusive city, a city that is more efficient, better organized and resilient, and where the dignity of every citizen is respected."

Calling for a paradigm shift in urban development for the 21st century, he warned: “If we keep building cities in old fashioned ways, we are planting the seeds of continuing crises – in climate change, in lagging development, lack of integration and lack of dignity.”

“We need to rethink urbanization and that is why we need the participation of all stakeholders,” said Mr. Clos, stressing the need for such an approach in the run-up to the Third UN Conference on Housing and Sustainable Urban Development (Habitat III) in 2016.

“The cities of the world generate 80 per cent of the wealth and economic growth,” said Pr. Birch.

“The battle for a more sustainable future will be won or it will be lost in cities.”

The World Urban campaign is a platform of more than 70 institutions and networks coordinated by UN Habitat, and created in 2010 to define the direction that urban development must take in the coming decades.

In preparation for the 7th session of the World Urban Forum, to be held in April in Medellin, Colombia, the booklet advocates among other things for more physically resilient cities and the development of affordable housing in order to ensure that the billion people who are living in slums today will have a better future.

Mr. You, from the World Urban Campaign, emphasized that in the next 40 years, the world urban population is expected to double and “we will be building and constructing more human settlements than we have since the beginning of human history. If we do that right we have every hope of achieving sustainable development for everybody. If we do it wrong, we are in very, very serious trouble,” Mr. You said.

“We have one chance to get the future of our urban world right, and only this chance in the next 30 years and we have to start now.” 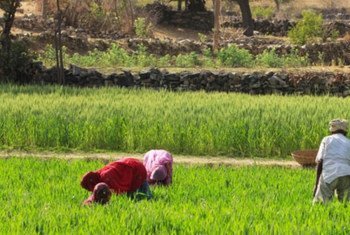 3 March 2014
Ensuring food security is one of the most pressing challenges in Africa, which is increasingly losing ground as a result of challenges from climate change to land degradation, the top United Nations environment official today said, urging a stronger emphasis on the continent’s transition to a ‘green economy.’