6 January 2014
Three helicopters have been deployed to the South Sudanese capital of Juba today to help reinforce United Nations peacekeeping bases in the country, a UN spokesperson confirmed, warning that relief supplies available for the thousands of civilians seeking refuge in the Bor compound are running low.

The Bangladesh military choppers, on temporary loan from the UN peacekeeping mission in the Democratic Republic of the Congo (MONUSCO), are to be used by the UN Mission in South Sudan (UNMISS) to transport personnel and equipment.

The effort is part of a Security Council-authorized plan to double the Mission's armed strength to nearly 14,000 in an effort to protect civilians affected by the three weeks of on-going fighting between pro- and anti-Government troops.

Over the weekend, there were signs of mobilization of troops on both sides, the spokesperson told journalists in New York.

The situation in Bor, Jonglei State, remains “tense” following days of heavy fighting south of the town, he added. The UN Mission continues to protect some 9,000 civilians in its compound there.

“The resupply of the UNMISS Bor base is becoming a critical issue,” spokesperson Farhan Haq said. “Medical capacity continues to be severely overstretched.”

Further south in Juba, the Mission reported incidents of shooting over the weekend. An exchange of fire Saturday night near the Jebel market and the National Security headquarters led to a further 1,000 civilians taking shelter in the UN House base. A shooting incident nearby the Mission's Tomping base on Sunday night led to more people seeking refuge there.

Meanwhile, the UN's humanitarian wing is also reinforcing its ability in Juba and other key areas of the country, such as the Lakes state county of Awerial where up to 76,000 people have gathered, in order to meet the needs of civilians.

Some $100 million of the requested $166 million has been raised to bring in additional supplies and staff to assist some 628,000 people in need over the next three months.

Meanwhile, representatives of President Salve Kiir and the feuding former deputy president Riek Machar are in the Ethiopian capital of Addis Ababa, participating in talks mediated by the Intergovernmental Authority on Development (IGAD). Topping the agenda, an immediate cessation of hostilities, the release of all political detainees, political dialogue and humanitarian access. 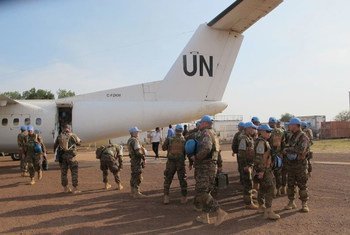 4 January 2014
The security situation in South Sudan remains “fluid”, the United Nations peacekeeping mission in the country today said, confirming that it is sending reinforcements to areas affected by the current fighting between pro- and anti-Government troops, particularly Bor, Malakal, Bentiu and Juba.