UNMISS/Anna Adhikari
Some 39 peacekeepers from the UNMISS Mongolian Battalion based in Rumbek, South Sudan, arrived in Bentiu on 30 December 2013 to reinforce UN presence in Unity state.

4 January 2014
The security situation in South Sudan remains “fluid”, the United Nations peacekeeping mission in the country today said, confirming that it is sending reinforcements to areas affected by the current fighting between pro- and anti-Government troops, particularly Bor, Malakal, Bentiu and Juba.

“This is critical to enable the Mission to deliver on its mandate to protect civilians,” UNMISS said. It specified that thousands of additional police, military, logistics support and selected civilian staff are being relocated to the affected areas, per the Security Council's authorization.

Three weeks of violence in the world's newest country have claimed thousands of lives and forced about 200,000 people from their homes, many seeking refuge inside UN bases.

UNMISS said that two stand-by police components known as Formed Police Units have been deployed to strengthen security and order for civilians on UN compounds. A medical team from the UN Mission in Cote d'Ivoire (UNOCI) arrived yesterday in Juba to bolster support at the UN Juba bases. Logistical support for air operations is being provided by the UN Mission in the Democratic Republic of the Congo, MONUSCO.

More aircraft are arriving this week to assist with transport of essential supplies to troops and civilians, the Mission confirmed. They will be followed by additional police from Nepal, and later also troop reinforcements.

The UN's humanitarian wing has significantly reinforced its ability in Juba and other key areas of the country, such as the Lakes State county of Awerial where up to 76,000 people have gathered, in order to meet the needs of civilians.

According to the Mission, close to $100 million have been raised in the past 72 hours to bring in additional supplies and staff to respond to the evolving situation.

Humanitarian partners in the country had issued a $166 million plan to assist some 628,000 people over the next three months. It includes provision of protection, water, food, shelter and healthcare. It also aims to help those that have left Sudan and sought refuge in South Sudan's Unity and Upper Nile states.

Representatives of President Salve Kiir and the feuding former deputy president Riek Machar are meeting in the Ethiopian capital of Addis Ababa, in talks mediated by the Intergovernmental Authority on Development (IGAD).

In a New Year's message to the people of South Sudan, UNMISS chief Hilde Johnson voiced support for the talks and summarized the agenda: an immediate cessation of hostilities, the release of all political detainees, political dialogue and humanitarian access. 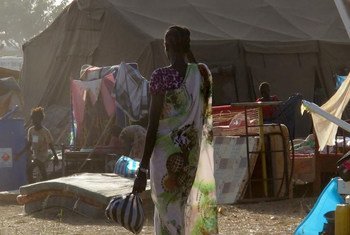 3 January 2014
The situation in crisis-torn South Sudan remains tense today and, with clashes reported between pro- and anti-Government troops in some areas and thousands of people fleeing the ongoing violence, United Nations officials in the country are urging all parties in the conflict to protect civilians and to allow humanitarian workers safe access to them.