“Killings in Bangui (the capital) and in the rest of the country continue every day, and the population remains divided along religious affiliation,” Under-Secretary-General for Political Affairs Jeffrey Feltman told the Security Council in a briefing on the impoverished nation, where thousands of people are estimated to have been killed, nearly 1 million driven from their homes, and 2.2 million, about half the population, need humanitarian aid.

“Access to residential neighbourhoods in Bangui is controlled either by ‘anti-Christian’ or ‘anti-Muslim’ checkpoints, manned by armed civilians. Similarly, localities outside Bangui like Bossangoa, Bouar, Bozoum and Paoua, among others, witness atrocities on a daily basis, including direct clashes between the Christian and Muslim communities,” Mr. Feltman said.

CAR was thrown into turmoil when mainly Muslim Séléka rebels launched attacks a year ago and forced President François Bozizé to flee in March. A transitional government has since been entrusted with restoring to peace and paving the way for democratic elections, but armed between ex-Séléka and Christian anti-balaka militias have escalated significantly in the past two weeks.

Now lack of security, funding and access is hampering efforts by the UN and its partners to bring relief, the UN Office for the Coordination of Humanitarian Affairs (OCHA) reported today.

“The violence and the atrocities in the CAR must stop,” Mr. Feltman said. “Those in positions of authority or influence must do more to end violence and halt grave violations against civilians, including children.

“Attacks against humanitarian personnel, and the use of civilian spaces such as schools and hospitals for military purposes must also end. I ask the Council to again remind all parties to the conflict of their responsibilities under International Humanitarian and Human Rights Law and to ensure that all those responsible for violations are held to account.”

Mr. Feltman noted that the Transitional authorities’ inability to curb widespread Séléka human rights abuses and violations against Christians over the past year contributed to the gradual transformation of local self-defense groups, the anti-Balaka, into a full-blown rebellion.

“As a result of its predominantly Muslim composition, Séléka abuses against the Christian populations in the CAR were quickly interpreted as a religious conflict pitting Muslims against Christians,” he added.

“On the other hand, the frustration of Muslim communities in the CAR is the result of years of marginalization by the successive Governments since the country’s independence over 50 years ago. For instance, while the Muslim community represents an estimated 20 per cent of the total population of the CAR, no Muslim holidays are observed officially by the country.”

Now, nearly one in every two inhabitants of Bangui has been driven from their homes, some 513,000 in all, of whom 100,000 are at a makeshift camp at the airport where OCHA reported that insecurity has made it hard to provide essential services, including an emergency vaccination campaign against measles, which started across the country on 3 January.

For the first time in CAR’s history people have felt obliged on account of their religion to leave the country for fear for their lives, and several nearby countries including Cameroon, Chad, Côte d’Ivoire, Mali, Niger, Nigeria and Senegal, have repatriated tens of thousands of their citizens, the vast majority of them Muslims, Mr. Feltman said.

“Those displaced urgently need protection and shelter, as well as access to water, healthcare, food, basic supplies, and sanitation and hygiene services,” he declared. “NGO (non-government organizations) partners and staff of UN humanitarian agencies, funds and programmes have remained in CAR to deliver assistance, in what is a very dangerous and unpredictable environment.

“The increase in violence last month has exacerbated the needs… Despite the tremendous efforts of humanitarians on the ground, needs continue to outpace the response. Violence and insecurity has forced many to flee into the forests and out of reach of aid. Lack of funding has also constrained the response and threatens to further inhibit humanitarian operations unless funding is urgently received.”

He noted that the UN World Food Programme (WFP), which provided over 1.7 metric tons of food to nearly 250,000 people in December, will be 90 per cent depleted in CAR by February without additional contributions. The UN humanitarian Country Team, meanwhile, has developed a 100-day plan requiring $152 million to rapidly scale up life-saving assistance and protection.

Mr. Feltman praised the quick deployment of African Union (AU) and French forces which prevented the situation from degenerating to higher levels of conflict and atrocities. The UN is currently working with the AU on organizing a donors’ conference in Addis Ababa on 1 February to help the AU force as to reach its authorized strength of 6,000.

On a more positive note, he cited some progress on the issue of elections with the adoption of a new electoral code, and the swearing in of the seven-member National Electoral Authority (NEA), which brings together representatives of civil society, the political parties and the Government, with the UN Integrated Peacebuilding Office in CAR (BINUCA)providing technical and logistics support.

But he returned again to the humanitarian toll of the conflict. “As I mentioned at the outset, nearly half the population needs humanitarian assistance,” he said stressing that women and children, constituting the most vulnerable group in the society, have been disproportionally affected among the more than 935,000 people now sleeping outside or in temporary spaces.

“There is a very real risk that the crisis could spread beyond the country’s borders and further destabilize the region,” he declared in summing up the situation in CAR and pledging that the UN “will continue to do its best to prevent the situation in the CAR from unravelling further and human rights abuses and violations to reach unthinkable levels, ensure humanitarian aid for the most vulnerable, and return the country to constitutional order.” 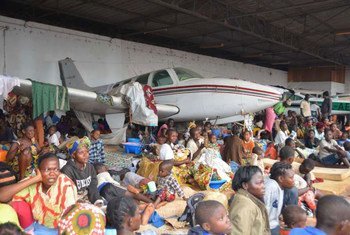 3 January 2014
The humanitarian situation in the Central African Republic remains dire with insecurity hampering the delivery of aid to the more than 935,000 people displaced by the violence, the United Nations refugee agency today said.