“Your concerted efforts in policy formulation and implementation, together with the constructive engagement of your citizens and the private sector, as well as our mutual collaboration will be pivotal to any new development agenda,” John Ashe told Ministers of Parliament at an Inter-Parliamentary Union (IPU) meeting at UN Headquarters in New York.

“The service of members of parliament the world over enhances the process and cause of democracy by providing a forum that gives expression to the will and voice of citizens.”

In line with a General Assembly resolution on UN and IPU cooperation, the joint event – known as the Annual Parliamentary Hearing – brings together members of parliament and high-ranking UN officials, representatives of Member States and experts drawn from think tanks and civil society organizations for an interactive discussion. Established in 1889, the IPU works in close cooperation with the UN, as well as with international inter-governmental and non-governmental organizations.

The main theme of this year’s gathering is ‘Rethinking sustainable development; the quest for a ‘transformational’ global agenda in 2015.’ The conclusions of the Hearing will be circulated to the wider UN community as well as to all national parliaments.

In his remarks, Mr. Ashe emphasized that parliamentarians are uniquely positioned to influence the shape and content of their respective national development and agendas, and called for their collaboration to provide insights into what each of their constituencies require.

“Your parliamentary membership should make you well aware of your specific national circumstances,” he said. “We, in the UN, need you to bring this perspective and experience into the process of defining new goals, as well as translating the future development agenda into your own national perspectives, ultimately leading to credible laws and institutions within the context of your national realities.

“For while we seek to craft an international agenda with elements of commonality at the UN General Assembly level, the development model that each country employs must have its own peculiar DNA.”

Mr. Ashe said parliamentary Ministers can help make progress on issues such as women’s participation, youth and civil society, human rights, the use of technology for development and sustainable energy, among others.

He added that they also have the crucial role of ensuring that gains on the eight anti-poverty targets known as the Millennium Development Goals (MDGs) are sustained and built upon at a national level.

“Many of you did your utmost to achieve the MDGs, you now have the critical task of ensuring national accountability and oversight in the implementation of the post-2015 development agenda and the attainment of the SDGs (sustainable development goals). Just as you contribute to this process, I also call upon the organizations and bodies of the UN system to continue supporting you in your work, including your perspectives, and strengthening your role as parliamentarians.” 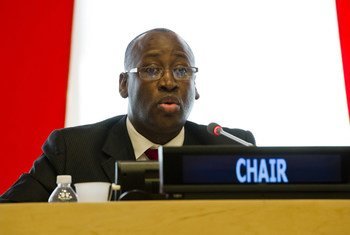 8 November 2013
With myriad technological, demographic and financial factors impacting all facets of labour – perhaps even giving the idea of work an altogether different meaning in the years to come – two key United Nations bodies joined forces today to examine “the future of employment” and the need for bold action to ensure the post-2015 development agenda provides decent work for all.