OCHA
Humanitarian Chief Valerie Amos (left) meets with a member of the UN Disaster Assessment and Coordination team in Tacloban, the Philippines.

14 November 2013
The top United Nations humanitarian official today called for a sustained and collective response from the international community to help those affected by Typhoon Haiyan, and added that despite logistical challenges, aid is increasingly reaching those in need.

“Tens of thousands of people are living in the open or sheltering in the remains of their homes and badly damaged public buildings, exposed to rain and wind. Many have lost loved ones and are traumatized by their experience. Our focus is now on scaling up our efforts,” Emergency Relief Coordinator Valerie Amos said at a press conference in the capital, Manila.

The typhoon slammed the country over the weekend and according to the UN Office for the Coordination of Humanitarian Affairs (OCHA), some 11 million people have been affected, and more than 600,000 people have been displaced.

Ms. Amos has been travelling to the worst-affected areas, including the city of Tacloban, where she spoke to survivors who were homeless and waiting for relief supplies to reach them. She also met with President Benigno Aquino III, and senior Government officials who are leading response efforts, and assured them of the humanitarian community’s continued support.

“People with absolutely nothing are doing their best to regain some degree of normality,” Ms. Amos said. “We must do all we can to ensure they receive the help they desperately need.”

The delivery of aid has been hampered by a series of logistical challenges. While most airports have now reopened, electricity and power are still to be restored in some areas. Many roads are covered in debris and there are fuel shortages. However, as each hour and day passes, more aid is reaching people affected, OCHA said.

“Today and in the next few days things will get even better as our capacity increases,” Ms. Amos said. “We know that much more is required.”

On Tuesday, Ms. Amos launched an appeal for $301 million to provide humanitarian assistance, and UN agencies are stepping up efforts to provide health and medical supplies, as well as food. Yesterday, the World Food Programme (WFP) airlifted life-saving supplies, including 2,500 metric tonnes of high-energy biscuits, to Tacloban.

“There is utter devastation. People are desperate for food, water, shelter, supplies and information about their loved ones. I am especially concerned about the tens of thousands of people exposed to the elements. We are doing everything possible to rush assistance to those who need it” said Mr. Ban.

The UN chief also said that now is the time for the international community to stand with the people of the Philippines. “They are showing great courage and resilience, but they need our help – and they need it now and they need it fast,” he said. 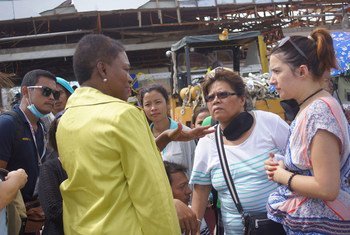 13 November 2013
As the United Nations and other organizations scale up the massive relief operation under way in the typhoon-battered Philippines, the UN humanitarian chief is meeting today with survivors in the hard-hit city of Tacloban, a day after launching a $301 million flash appeal for lifesaving aid.