8 November 2013
With myriad technological, demographic and financial factors impacting all facets of labour – perhaps even giving the idea of work an altogether different meaning in the years to come – two key United Nations bodies joined forces today to examine “the future of employment” and the need for bold action to ensure the post-2015 development agenda provides decent work for all.

The implications of the digital revolution and new technologies, including three-dimensional printing, will be felt in labour markets in both developed and developing countries, Abdou Salam Diallo, Chair of the General Assembly body dealing with economic and financial matters, also known as the Second Committee said, opening a special joint meeting with the UN Economic and Social Council (ECOSOC).

The work of the meeting, focused on The future of employment: The world of work in 2030, was built around a panel discussion that featured presentations from UN, Government and civil society experts covering such issues as identifying social polices that adjust to the new realities of evolving labour markets, ensuing such polices address the risk of growing inequalities among and within countries, the role the UN in that regard, and making sure the post 2015 development agenda reflects these trends, defines clear objectives and allows for appropriate follow-up.

Mr. Diallo noted that transformations in employment and labour markets will continues even as more than 470 million jobs must be created between 2015 and 2030 to provide answers to the effects of the financial crisis and to absorb the growth of the world’s labour force. As such, new skills will need to be taught on a large scale to take advantage of these developments, especially to boost youth employment.

“The world can not afford a new digital divide between those who are trained in these technologies and those who are not,” he said, appealing to delegations to take the current changes in the workspace into account when defining the global agenda that will succeed the Millennium Development Goals (MDGs) in 2015 and to ensure that broad based polices promote adaptation to “new realities” while reducing inequality.

In his remarks wrapping up the event, ECOSOC Vice-President Martin Sadjik said the speed of technological progress and the disruptive impact it will have on employment in all countries is an important challenge that both the Second Committee and the Council will have to continue to address for some time in the future.

Noting that the participants in the discussion had stressed that the new digital economy will spur economic growth and lead to the creation of high quality jobs but that “new wave” technologies will reduce job opportunities for those who do not have the requisite skills, he said: “This could lead to social disruption and potentially to conflict.”

“This is why development strategies must give priority to fighting stubbornly high unemployment rates, especially among young people, and expanding social protections systems to cushion the impact of the dislocation many are experiencing.”

In the months ahead, as the international community designed a new set of goals and commitments for the post-2015 development agenda, “we should consider the interconnectedness between jobs, poverty reduction and sustainable development,” said Mr. Sadjik, adding that delegations must be to be “bold in our approach and to act on the basis of a common vision for the world of work in the short and medium term.”

While the task is ambitious the General Assembly and ECOSOC will continue to join forces to move forward towards a UN development agenda. The year 2014 should provide numerous opportunities to do so, he said, adding: “I am convinced that such collaboration, together with close and regular interaction with the ILO (International Labour Organization)…will allow us to gain in relevance and in ambition as we move towards 2015 and plan for the future.” 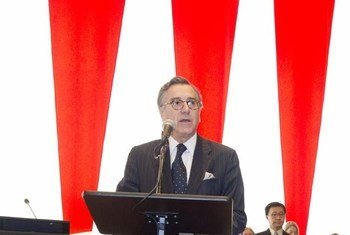 6 November 2013
Partnerships are vital if countries want to reduce poverty and advance economic and social progress, United Nations officials stressed today, as they considered ways to address challenges and accelerate the achievement of the global anti-poverty targets known as the Millennium Development Goals (MDGs).