6 November 2013
The amount of greenhouse gases in the atmosphere reached a record high in 2012, continuing an upward trend which is driving climate change and which will shape the future of the planet for hundreds and thousands of years, according to the United Nations World Meteorological Organization (WMO).

The agency’s annual Greenhouse Gas Bulletin shows that between 1990 and 2012, there was a 32 per cent increase in radiative forcing – the warming effect on the climate – because of carbon dioxide (CO2) and other heat-trapping long-lived gases such as methane and nitrous oxide.

Carbon dioxide, mainly from fossil fuel-related emissions, accounted for 80 per cent of this increase, WMO stated in a news release. The atmospheric increase of CO2 from 2011 to 2012 was higher than its average growth rate over the past 10 years.

What is happening in the atmosphere, said the Geneva-based WMO, is “one part of a much wider picture.” Only about half of the CO2 emitted by human activities remains in the atmosphere, with the rest being absorbed in the biosphere and in the oceans.

The latest findings “highlight yet again how heat-trapping gases from human activities have upset the natural balance of our atmosphere and are a major contribution to climate change,” said WMO Secretary-General Michel Jarraud.

He recalled that the UN-backed Intergovernmental Panel on Climate Change (IPCC) stressed in its recent Fifth Assessment Report that atmospheric concentrations of carbon dioxide, methane, and nitrous oxide have increased to levels unprecedented in at least the last 800,000 years.

“As a result of this, our climate is changing, our weather is more extreme, ice sheets and glaciers are melting and sea levels are rising,” said Mr. Jarraud.

He underscored that limiting climate change will require large and sustained reductions of greenhouse gas emissions. “We need to act now, otherwise we will jeopardize the future of our children, grandchildren and many future generations,” said Mr. Jarraud. “Time is not on our side,” he added.

If the international community fails to take action, the report warned, the chances of remaining on the least-cost path to keeping global temperature rise below 2 degrees Celsius this century will quickly diminish and open the door to a range of challenges.

Under the UN Framework Convention on Climate Change (UNFCCC), governments have agreed to limit the global temperature rise to 2 degrees Celsius to avoid the worst impacts of climate change.

The report, which was released yesterday as leaders prepare to meet for the upcoming UN Climate Change Conference in Warsaw, finds that although pathways exist that could reach the 2-degree Celsius target with higher emissions, not narrowing the gap will exacerbate mitigation challenges after 2020.

“As the report highlights, delayed actions mean a higher rate of climate change in the near term and likely more near-term climate impacts, as well as the continued use of carbon-intensive and energy-intensive infrastructure,” said UNEP Executive Director Achim Steiner.

“This ‘lock-in’ would slow down the introduction of climate-friendly technologies and narrow the developmental choices that would place the global community on the path to a sustainable, green future.

“However,” he added, “the stepping stone of the 2020 target can still be achieved by strengthening current pledges and by further action, including scaling up international cooperation initiatives in areas such as energy efficiency, fossil fuel subsidy reform and renewable energy.” 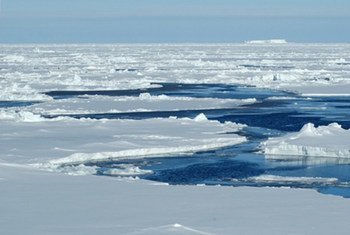 27 September 2013
United Nations officials today called for a global response to combat climate change, following new findings by a scientific panel stating it is “extremely likely” that humans have been the dominant cause of unprecedented global warming since 1950.