“Strengthening natural resource governance and improving monitoring in conflict-affected States can help prevent resources from fuelling conflict, direct much-needed revenue towards economic revitalization and contribute to more lasting peace,” Mr. Ban said in his message marking the International Day for Preventing the Exploitation of the Environment in War and Armed Conflict.

Conversely, he said, “failing to protect and manage these resources in an equitable way only exacerbates the vulnerability of those who depend on them the most, especially the poor,”

Established by the UN General Assembly in 2001, the International Day was created to spotlight the tenuous link between global and regional conflicts and the environment.

According to the UN Environment Programme (UNEP), at least 40 per cent of all internal conflicts of the past 60 years have been linked to the exploitation of natural resources, whether high-value resources such as timber, diamonds, gold and oil, or scarce resources such as fertile land and water. In Somalia, for example, it is estimated that the illegal trade in charcoal represents annual revenues of up to $384 million for insurgents and terrorist groups.

Against such a backdrop, UNEP used the opportunity provided by the Day to launch a new website providing users with free access to dozens of case studies as well as teaching and training materials on the role of natural resources in peacebuilding. It will serve as a global platform for sharing information, experiences and learning on the links between natural resources, conflict and peace.

The contents of the site were produced as part of a broad collaboration led by Environmental Law Institute (ELI), UNEP, McGill University and the University of Tokyo, together with 225 researchers and practitioners around the world. Six books including 150 case studies and other analyses examining experiences from 60 conflict-affected countries and territories are being released to the platform, with 76 case studies already available online.

In his statement, Mr. Ban said: “On this International Day, we stress the critical importance of protecting the environment in times of armed conflict and restoring the good governance of natural resources during post-conflict reconstruction.”

“We also recognize the important role that natural resources play in supporting the livelihoods and resilience of all members of society, especially women, and the implications of sustainable natural resource management for conflict prevention and peace,” he added.

Mr. Ban also pointed to the challenge of safely disposing of weapons of war without harming the environment, which is currently being tackled by the Organisation for the Prohibition of Chemical Weapons (OPCW) in Syria. “Environmental contamination also includes land mines and unexploded ordnance, which pose a particular threat to women and children who are often more vulnerable due to their daily activities,” he added.

Meanwhile, UNEP and Interpol are marking the Day by holding a high-level meeting in Nairobi, Kenya, this week on the impacts of environmental crime on security and development. The two-day Executive-Level Environmental Compliance and Enforcement Committee Meeting will look into developing and implementing innovative strategies to combat environmental crime, working with Governments, international organizations and local communities.

In a joint news release, the agencies stressed environmental crime such as illegal trade of wildlife is a growing international problem. Wildlife crime alone is estimated to be worth $15-20 billion annually, and profits are largely used to help finance terrorism and organized crime across the world. In addition, illegal, unreported and unregulated fishing accounts to 11-26 million tonnes a year, equivalent to 15 per cent of world catches.

“The theft of natural resources by the few at the expense of the many is rapidly emerging as a new challenge to poverty eradication, sustainable development and a transition towards an inclusive green economy when one looks at the scale and breadth of these criminal activities,” said UNEP Executive Director Achim Steiner.

“Whether it be timber or fisheries, or the dumping of hazardous wastes, improved intelligence gathering, focused police work, strengthened customs capacity and the engagement of the judiciary are all going to be vital pieces towards our shared ambition of a less crime-ridden and more just world.” 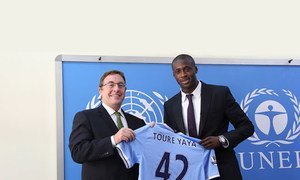