UNEP
Human activity will further warm the Earth, with dramatic effects on weather, sea-levels and the Arctic.
27 September 2013

United Nations officials today called for a global response to combat climate change, following new findings by a scientific panel stating it is “extremely likely” that humans have been the dominant cause of unprecedented global warming since 1950.

“The heat is on. Now we must act,” Secretary-General Ban Ki-moon said in a video message to the launch of the report of the UN-backed Intergovernmental Panel on Climate Change (IPCC).

“This new report will be essential for Governments as they work to finalize an ambitious, legal agreement on climate change in 2015,” Mr. Ban said. “The goal is to generate the political commitment to keep global temperature rise below the agreed 2-degree Celsius threshold.”

The IPCC report, released today in Stockholm, Sweden, calls global warming “unequivocal,” and confirms that there is a 95 per cent probability that most of the warming since 1950 has been caused by human influence.

The report stresses that evidence for this has grown “thanks to more and better observations, an improved understanding of the climate system response and improved climate models.”

“The IPCC report demonstrates that we must greatly reduce global emissions in order to avoid the worst effects of climate change,” said the Secretary-General of the World Meteorological Organization (WMO), Michel Jarraud. “It also contains important new scientific knowledge that can be used to produce actionable climate information and services for assisting society to adapt to the impacts of climate change.”

“Climate change is a long-term challenge but one that requires urgent action, not tomorrow but today and right now, given the pace and the scale by which greenhouse gases are accumulating in the atmosphere and the rising risks of a more than 2-degree Celsius temperature rise,” said the Executive Director of the UN Environment Programme (UNEP), Achim Steiner.

In a statement issued by his spokesperson, Mr. Ban urged countries to take action swiftly to limie the effects of climate change. To add momentum to the global response, Mr. Ban intends to convene a Climate Summit in September 2014 for leaders at the highest level – from government, business, finance, civil society and academia.

“As the results from the latest and best available science become clearer, the challenge becomes more daunting, but simultaneously the solutions become more apparent. These opportunities need to be grasped across society in mutually reinforcing ways by governments at all levels, by corporations, by civil society and by individuals,” said the Executive Secretary of the UN Framework Convention on Climate Change (UNFCCC), Christiana Figueres.

Under the UNFCCC, governments have agreed to limit the global temperature rise to 2 degrees Celsius to avoid the worst impacts of climate change. They have also agreed to assess the adequacy of this limit and progress towards this goal using the best science, including the IPCC report.

“Thankfully, momentum to fight climate change is building. We know that success is possible. We have the technology, funding and ability to respond. The many successes at domestic, international and private sector levels to build a low-carbon society shine light on the way forward, but we do need to quickly go to scale,” Ms. Figueres added.

It has been six years since the IPCC, which brings together the world’s leading climate scientists and experts, released its previous report. Back then, scientists stated it was “very likely” that humanity’s emissions of carbon dioxide, methane, nitrous oxide and other greenhouse gases have caused most of the global temperature rise observed since the mid-20th century. 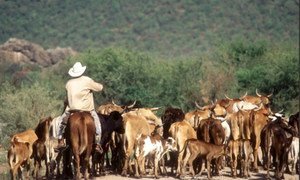 Wider use of available best practices and technologies could help reduce greenhouse gas emissions from the livestock sector by as much as 30 per cent, according to a new study released today by the United Nations Food and Agriculture Organization (FAO).