Highlighting Honduras’ success at overcoming its “severe” 2009 political crisis, the country’s Vice-President told the United Nations General Assembly today that the Government will “stay the course with a firm hand,” by taking action to strengthen its institutions and curb the negative impacts of transborder crimes such as drug trafficking.

In a wide-ranging address to the Assembly’s annual General Debate Maria Antonieta Guillen De Bogran said that Honduras has normalized security, built ties of close cooperation with over 100 countries, and restored confidence in foreign investors.

Part of the process of healing the wounds of the 2009 political crisis has also been the adoption and implementation of a major national agreement focused on economic growth and social equality with Government, business unions, workers, farmers and civil society.

Yet, she said Honduras and its democratic institutions still suffer attacks from “foreign aggressors,” referring to drug trafficking and various forms of associated violence and criminal activity. Noting that her Administration has had major success in bringing down the national homicide rate, she said the Government is also responding with a number of reforms in the security and justice sectors, and through adopting a tax to strengthen citizen safety, provided training to security and defence sector and enacting policies to protect children and youth.

Although halting violence was a positive sign, it more remained to be done given the high level of transborder criminal activity. Yet, she said, the Government will sustain the progress made, and she called on the future Government of Honduras to “stay the course with a firm hand” and continue to strengthen security and justice institutions.

“Effectively combating transnational crime also requires international and regional efforts,” she continued, as they are more comprehensive in enforcing the principle of shared but differentiated responsibility between countries that are producers and those that were consumers of drugs.

Ms. Guillen De Bogran is among the scores of leaders to speak at the annual session at which heads of State and Government and other high-level officials will present their views and comments on issues of individual national and international relevance. 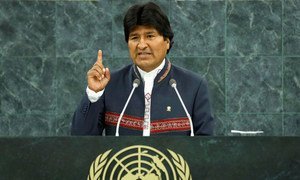