27 September 2013
No agenda to achieve anti-poverty targets is attainable with countries facing the myriad threats associated with terrorism and with the “drums of war still beating” in many regions, the Vice-President of Iraq today told the United Nations General Assembly.

No agenda to achieve anti-poverty targets is attainable with countries facing the myriad threats associated with terrorism and with the “drums of war still beating” in many regions, the Vice-President of Iraq today told the United Nations General Assembly.

In his statement to the 68th Assembly’s high-level debate, Vice-President Khudheir Mussa Al-khuzaie urged heads of State and Government and other senior officials to “dry up financial, intellectual and armament resources of terrorism.”

Turning to the situation in neighbouring Syria, Mr. Al-khuzaie called the conflict a “serious threat to our security, stability and the integrity of our land and people.” He urged a peaceful solution to the conflict warning that otherwise, “the region will forge ahead towards the unknown.”

The Vice-President noted that the Middle East is beleaguered by concerns of regional and large-scale war that may begin or be triggered by a small spark.

“No one could guess the scope, trends, trajectories or the time of such a conflict,” he said. “Consequently, no sustainable development, stability or prosperity could be hoped for in a region, which is already fragile, explosive and complex.”

Against such a backdrop, he said that since the fall of the previous regime, Iraq has remained strongly convinced that peaceful solutions are the most efficient means to settle all the current problems between peoples, nations and Governments.

“We reject violence, terrorism and aggression, irrespective of its sources,” he said, adding that the Iraqi Government has also launched a call for tolerance, national reconciliation and cooperation with a view to attain communal coexistence, social peace, stability and prosperity.

Mr. Al-khuzaie is one of scores of leaders to speak at the annual General Assembly session at which heads of State and Government and other high-level officials have been presenting their views and comments on issues of individual national and international relevance.

The focus of this year’s debate is on laying the foundation for a sustainable development agenda in the years after 2015, the deadline for achieving the eight anti-poverty targets known as the Millennium Development Goals (MDGs).

The Iraqi official detailed a national development plan for the next four years which incorporates elements of the MDGs, including poverty alleviation, reducing unemployment, lowering infant mortality, increasing school enrolment, and combating desertification and increasing energy of water resources. 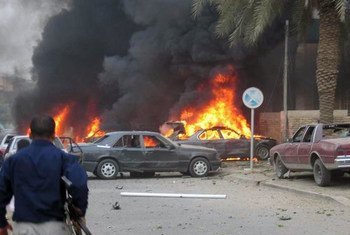 12 September 2013
A senior United Nations official in Iraq today strongly condemned a suicide bomb attack against a mosque in the northern area of Baghdad, which killed and injured dozens of worshipers as they were leaving evening prayers.