24 September 2013
As he opened the annual United Nations forum for world leaders today, the President of the General Assembly appealed to them to renew their commitment to work together to eradicate poverty and foster economic and social prosperity for people across the world through a new development agenda.

As he opened the annual United Nations forum for world leaders today, the President of the General Assembly appealed to them to renew their commitment to work together to eradicate poverty and foster economic and social prosperity for people across the world through a new development agenda.

“Effective multilateralism takes dogged determination and a commitment to negotiate and work cooperatively, especially if the quest is to evolve towards a shared consensus that is both broad and lasting,” John W. Ashe told heads of State and Government and other high representatives gathered for the 68th Session of the UN General Assembly in New York.

The theme for this year’s session is ‘The Post-2015 Development Agenda: Setting the Stage,’ and Mr. Ashe urged Member States to take this opportunity to help shape an inclusive development agenda.

“The Post-2015 Development Agenda is envisaged as the most far-reaching and comprehensive development-related endeavour ever undertaken by our Organization in its entire history,” he said. “It will completely redefine the concept of development as traditionally understood, rooting it in partnership, cooperation, equity – both social and generational – peace, good governance and economic growth based on environmental sustainability.”

Mr. Ashe noted that while this year’s meeting is happening amid conflict in various regions, with many countries struggling with the adverse effects of climate change and millions of people still living in extreme poverty, Member States should not give in to pessimism but should work even harder to address such issues.

“This annual gathering of world leaders and dignitaries should not just be seen as another September routine or tradition; rather, it serves and should serve another larger and better purpose – that of recommitting ourselves and our countries to the noble ideals that lie at the organization’s core,” Mr. Ashe said.

“We are faced with high levels of pessimism and cynicism that we will not be up to the task and that we lack the effort and discipline to effectively address the world’s needs. Let us prove the nay-sayers wrong – let us put our shoulders to the plough and work with each other in a spirit of collaboration.

“Let us focus on the business ahead, cognisant of the sacred trust which brings us here, committed to the peoples we serve, looking beyond individual and narrow interests and intending to conclude the work we must do here. Let us not forget that while we sit in this august gathering, there are millions who go to sleep in the dark, hungry and insecure, fearful of what another tomorrow may bring.”

Beginning Tuesday and continuing through 1 October, the General Debate will provide an opportunity for high-level political officials to weigh in on what Mr. Ashe has called “pivotal” talks on identifying the parameters of the post-2015 sustainability agenda, which will succeed the eight anti-poverty targets known as the Millennium Development Goals (MDGs). 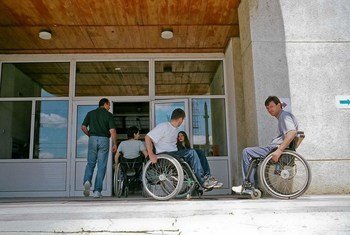 23 September 2013
The rights of persons with disabilities must be directly addressed by the post-2015 development agenda, United Nations officials today urged a High-level meeting of the General Assembly, where world leaders pledged to work together on national and international policies that enhance and promote disability-inclusive development.