24 September 2013
With the world facing a raft of “profound new challenges,” United States President Barack Obama challenged United Nations Member States today to evince the courage and determination to act decisively “when the breakdown of societies is so great [and] the violence against civilians so substantial.”

With the world facing a raft of “profound new challenges,” United States President Barack Obama challenged United Nations Member States today to evince the courage and determination to act decisively “when the breakdown of societies is so great [and] the violence against civilians so substantial.”

“This body continues to be tested. The question is whether we possess the wisdom and the courage as […] members of an international community, to squarely meet those challenges: whether the United Nations can meet the test of our time,” Mr. Obama said, addressing the General Assembly's annual General Debate.

Indeed, he said, the leaders that had built the UN understood that humanity could not survive the course it was on. For decades the Organization has made a difference: eradicating disease, educating children and brokering peace. But as new challenges continued to arise, three will be times when the international community is called upon to act, stated Mr. Obama.

“This will require new thinking and some very tough choices. While the United Nations was designed to prevent wars between States, increasingly we face the challenge of preventing slaughter within States,” he said, emphasizing that such challenges will grow more pronounced as the international community is confronted with States that are fragile or failing, “places where horrendous violence can put innocent men, women and children at risk with no hope of protection from their national institutions.” 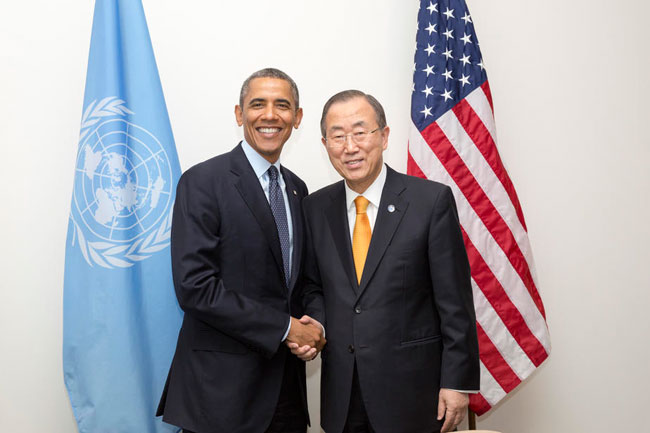 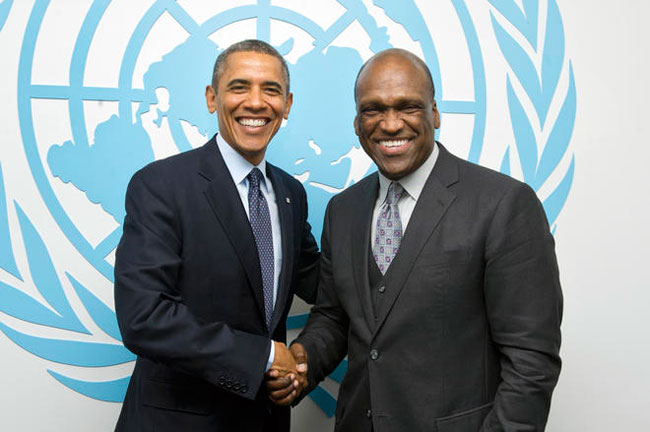 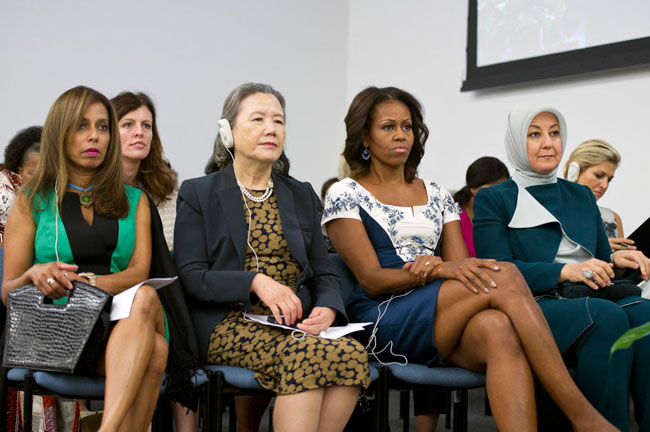 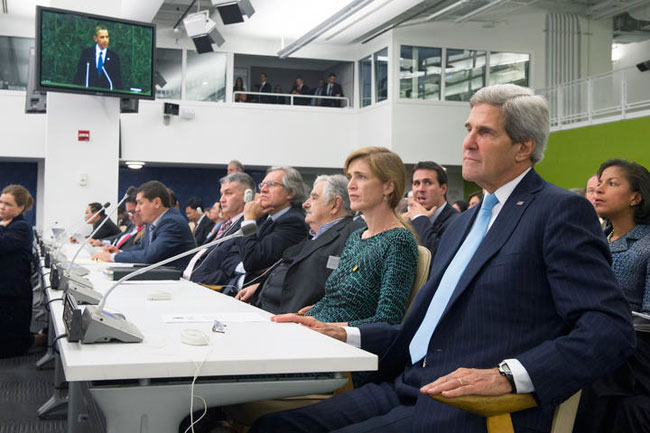 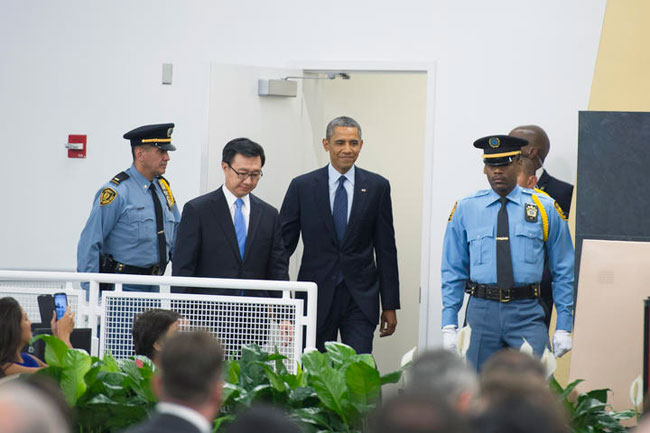 President Obama is escorted to the podium by UN Chief of Protocol Yoon Yeocheol at the opening of the general debate. UN Photo/Eskinder Debebe

“I've made it clear that even when America's core interests are not directly threatened, we stand ready to do our part to prevent mass atrocities and protect basic human rights. But we cannot and should not bear that burden alone,” Mr. Obama said.

Turning to Syria, where, he said, “peaceful protests against an authoritarian regime were met with repression and slaughter,” and in the face of such carnage, many retreated to their sectarian identifies – Alawites and Sunni, Christian and Kurd – and the situation spiralled into civil war, the international community recognized the stakes early on, “but our response has not matched the scale of the challenge.”

Mr. Obama said that Syrian President Bashar Al-Assad's traditional allies have “propped him up,” citing principles of sovereignty to shield his regime. And on 21 August, the regime used chemical weapons in an attack that “killed more than 1,000 people, including hundreds of children.”

He said that the crisis in Syria and the destabilization of the region goes to the heart of broader challenges that the international community must now confront. Putting key questions before Member States, he asked: “How should we respond to conflicts in the Middle East and North Africa? How do we address the choice of standing callously by while children are subjected to nerve gas, but we're embroiling ourselves in someone else's civil war? What is the role of the use of force?”

He said that the US believed that as a starting point, the international community must enforce the ban on chemical weapons. When he had stated his willingness to order a limited strike against the Assad Government in response to the brazen use of chemical weapons, “I did not do so lightly. I did so because I believe it is in the national security interests of the United States and in the interest of the world to meaningfully enforce a prohibition whose origins are older than the United Nations itself.”

The Syrian Government took a first step by giving an accounting of its stockpiles. Now, he said, there must be a strong Security Council resolution to verify that Damascus is keeping its commitments. “And there must be consequences if they fail to do so. If we cannot agree even on this, then it will show that the United Nations is incapable of enforcing the most basic of international laws.”

He did not believe that military action by those within Syria or by external powers can achieve a lasting peace, nor that the US or any nation should determine who will lead Syria. “That is for the Syrian people to decide,” he said, welcoming the influence of all nations that can help bring about a peaceful resolution. As negotiations continue on the holding of an international peace conference on Syria, he urged UN Member States to step up to meet humanitarian needs in Syria and surrounding countries.

On Iran, he acknowledged the deeply rooted mistrust between the two countries, dating back to 1979. And while he did not believe such difficult history could be overcome overnight, he did believe that if Washington and Tehran could resolve the issue of Iran's nuclear programme, “that can serve as a major step down a long road toward a different relationship, one based on mutual interests and mutual respect.”

Insisting that Tehran meet its responsibilities under the Nuclear Non-Proliferation Treaty (NPT) and Security Council resolutions, he also noted that Iran's supreme leader has issued a fatwah against the development of nuclear weapons. And President Hassan Rouhani has just recently reiterated that Iran will never develop a nuclear weapon.

Mr. Obama said he was directing US Secretary of State John Kerry to pursue a diplomatic course with the Iranian Government in close cooperation with the European Union, the United Kingdom, France, Germany, Russia and China.

As for the Israeli-Palestinian peace process, he said that the US will never compromise its commitment to Israel's security, nor its support for its existence as a Jewish State. Likewise, the US remains committed to the belief that the Palestinian people have a right to live with security and dignity in their own sovereign State.

“The time is now ripe for the entire international community to get behind the pursuit of peace. Already, Israeli and Palestinian leaders have demonstrated a willingness to take significant political risks,” he said, urging Member States to be willing to take risks as well.

“Friends of Israel, including the United States, must recognize that Israel's security as a Jewish and democratic State depends on the realization of a Palestinian State,” he said, adding that Arab States and those who support the Palestinians must recognize that stability will only be served through a two-State solution and a secure Israel.

Later in the day UN Secretary-General Ban Ki-moon met with President Obama and, according to a readout issued by a spokesman for the UN chief, the two discussed the situation in Syria, and agreed on the importance of continued UN engagement on the issue of Syrian chemical weapons, as well as the importance of a political solution and the need to avoid further loss of life.

Further to the readout, Mr. Ban and Mr. Obama discussed relations between the United States and Iran, and the importance of progress on the nuclear file. In addition, they discussed ongoing efforts in support of Somalia, Mali, Congo, Human Rights and UN reform. 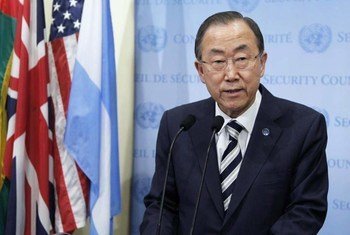 16 September 2013
A United Nations team probing the possible use of chemical weapons in Syria has found “clear and convincing evidence” that Sarin gas was used in an incident that occurred on 21 August in the Ghouta area on the outskirts of Damascus in which hundreds of people were reportedly killed.