In her speech to the General Assembly’s high-level debate today, the President of Brazil, Dilma Roussef, urged the United Nations to play a leading role in protecting Internet users from illegal interception of communications and data, and decried recent allegations of electronic information spying as “serious violations of human rights”.

In her speech to the General Assembly’s high-level debate today, the President of Brazil, Dilma Roussef, urged the United Nations to play a leading role in protecting Internet users from illegal interception of communications and data, and decried recent allegations of electronic information spying as “serious violations of human rights”.

Meddling in such a manner in the lives and affairs of other countries is a breach of international law and as such it is an affront to the principles that should otherwise govern relations among countries, especially among friendly nations,” Ms. Roussef said in reference to allegations that the information had been illegally gathered on the activities of the Brazilian Government.

Addressing a chamber of world leaders, as well as Secretary-General Ban Ki-moon and John Ashe, President of the 68th General Assembly, Ms. Roussef urged “the United Nations must properly regulate the behaviour of Member States regarding these technologies.”

She said Brazil would present proposals for the establishment of a framework for the governance and use of the Internet, and to ensure the effective protection of data that travels through the web.

It will be based on five key principles: freedom of speech; open, multi-lateral governance with transparency; principle of universality and non-discrimination; cultural diversity without imposing values; and network neutrality, guided only by technical and ethical criteria.

In her statement, Ms. Roussef noted Brazil’s fight “against poverty, hunger and inequality” which constitutes “the greatest challenge of our time.”

The UN is currently amidst its 800 days of accelerated action towards progress on the eight anti-poverty targets known as the Millennium Development Goals (MDGs), and laying the foundation for a sustainable development agenda in the years following the deadline in 2015.

“In the debate on the post-2015 Development Agenda we must focus on the result of the Rio+20,” Ms. Roussef said referring to the 2012 UN Conference on Sustainable Development.

Rio+20’s outcome document “The Future We Want” led to the creation of the High-level Political Forum which aims to ensure that sustainable development tops the agenda of the highest levels of Government and is embraced by all actors. The Forum is due to meet for the first time today on the sidelines of the General Assembly.

Noting the June protests in parts of Brazil, Ms. Roussef said her Government listened to the demonstrators as an “inseparable part of the development of our democracy and of social change.”

Turning to Security Council reform, Ms. Roussef said the body’s “limited representation” is an issue of “grave concern” exemplified by its immense difficulty in offering a solution to the Syrian conflict and paralysis in addressing the Israeli-Palestinian conflict.

“We must provide the Council with voices that are at once independent and constructive,” the President said, urging expansion of the number of permanent and non-permanent members “to solve and overcome the Council’s definite of representation and legitimacy.”

On the issue of Syria, Ms. Roussef said it is “necessary to stop the killing” and cease the use of conventional and chemical arms, whether by the Government or the rebels.

She underscored that there is no military outcome to the crisis and that “the only solution is through negotiation, dialogue and understanding.”

Similarly, it is now time, Ms. Roussef said, to realize the wide international consensus in favour to the two-state solution between Israelis and Palestinians.

Ms. Roussef and Mr. Ban discussed these topics during a bilateral meeting earlier today. According to a UN spokesperson, Mr. Ban also thanked Brazil for its “unwavering support” for Haiti and “outstanding” work of the Brazilian troops deployed to the UN Stabilization Mission in Haiti known as MINUSTAH. 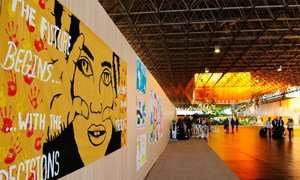 Marking an important milestone, the United Nations commission on sustainable use of the world’s resources today concluded two decades of work, paving the way for the incoming High-level Political Forum to boost efforts to tackle global economic, social and environmental challenges.