22 September 2013
Secretary-General Ban Ki-moon and the Chairperson of the African Union Commission, Nkosazana Dlamini-Zuma, today discussed ways to further strengthen the relationship between the two organizations.

“The Secretary-General thanked Ms. Dlamini-Zuma for the African Union's continued support to the work of the United Nations, in particular, to the offices based in Addis Ababa,” a UN spokesperson said following the meeting in New York.

Mr. Ban and Ms. Dlamini-Zuma are meeting on the sidelines of the high-level General Assembly debate which is due to start at the UN Headquarters on Tuesday.

The two officials also discussed issues of common interest in the Central African Republic (CAR), where a half-million people are estimated to be in dire need, made worse by fresh fighting in the northwest.

Mr. Ban and Ms. Dlamini-Zuma also discussed the Democratic Republic of the Congo (DRC) where some 80,000 people have been driven from their homes in a new outbreak of violence in the eastern part of the country.

Over the past year the fighting with the M23 in the Goma region has displaced more than 100,000 people, exacerbating an ongoing humanitarian crisis in the region which already includes 2.6 million internally displaced persons (IDPs) driven from their homes in clashes with other rebel groups and 6.4 million in need of food and emergency aid.

Mr. Ban, particularly through his special envoy to the Great Lakes Region, Mary Robinson, has stressed the importance of implementing the 11-nation Peace, Security and Cooperation Framework for the DRC and the region signed earlier this year as a comprehensive approach to sustainable peace in the region.

The AU, similarly to the UN, is tasked with overseeing its implementation, along with the International Conference on the Great Lakes Region (ICGLR), the Southern African Development Community (SADC).

Today's discussions also focused on Mali, Somalia, Guinea-Bissau, and Sudan and South Sudan, as well as the situation in Western Sahara.

Also today, Mr. Ban met with. Joyce Banda, President of the Republic of Malawi and current chair of the Southern African Development Community (SADC) together with Namibian President Hifikepunye Pohamba.

According to a readout of the meeting, Mr. Ban welcomed SADC's “important contribution” to the pursuit of peace and stability in the Great Lakes region and its strong support both to the Framework, and to the Uganda Talks between the Government of the DRC and the M23.

He also expressed appreciation for SADC's constructive role in Madagascar and underlined UN's readiness to work in support of these efforts. 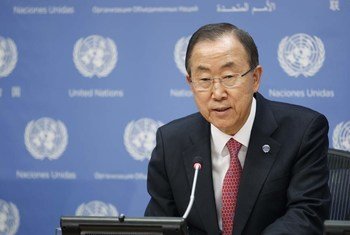