UN Photo/Kibae Park
A mother and her newborn baby at the Maternal and Child Health Training Institute for medically needy in Dhaka, Bangladesh.

22 September 2013
Gender equality and reproductive health are indispensable to sustainable development, and must be a key part of the post-2015 development agenda, participants said at a United Nations-organized regional conference in Thailand.

After days of intense discussions, nearly 500 delegates, including ministers and senior officials from 47 countries, adopted a comprehensive Asian and Pacific Ministerial Declaration on Population and Development.

The document was finalized on the last day of the Sixth Asian and Pacific Population Conference (APPC) in Bangkok, hosted by the UN United Nations Economic and Social Commission for Asia and the Pacific (ESCAP), in cooperation with the UN Population Fund (UNFPA).

“Addressing one of the most important parts of our unfinished business, it affirms the importance of non-discrimination, of ending violence against women and girls, and of universal sexual and reproductive health, services, and rights,” UN Under-Secretary-General and Executive Secretary of ESCAP, Noeleen Heyzer, said at the closing of the week-long conference on Friday.

She also noted that the document affirms the importance of national laws and policies which respect and protect the reproductive rights of every person, and “enables all people to exercise them without discrimination on any grounds.”

The document will be the region's input to next year's UN General Assembly review of the 20-year action plan on sexual and reproductive health rights which was agreed on in 1994 in Cairo at the UN International Conference on Population and Development (ICPD).

The Declaration reasserts key principles of the ICPD Programme of Action, stressing States' responsibility to protect human rights for all without distinction and to address the root causes of poverty.

It also calls for universal and equitable access to sexual and reproductive health services, to further reduce maternal deaths, ensure access to family planning and prevent the spread of HIV.

The Declaration emphasizes promotion of gender equality, including calls to end violence against women and girls and early and forced marriage.

It also highlights actions essential to further progress, particularly the rights of young people and their needs, including comprehensive sexuality education, access to contraception including for the unmarried, education and employment opportunities.

The Declaration is expected to contribute to discussions as the international community builds on the eight-poverty targets known as the Millennium Development Goals (MDGs) and prepares a post-2015 development agenda.

The summit, and the ministerial document it produced, are “pointing the way to the future we want: one in which human rights are upheld for all of us, with the exception of none of us,” said UNFPA Deputy Executive Director Kate Gilmore, who also attended the meeting.

Secretary-General appalled by terrorist attack on church in Pakistan 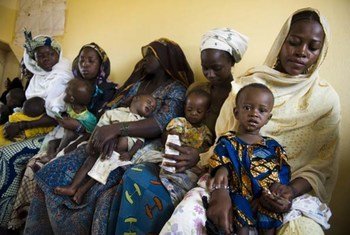 30 May 2013
Investing in the sexual and reproductive health of women and girls will help accelerate the achievement of the Millennium Development Goals (MDGs) and the post-2015 sustainable development agenda, United Nations senior officials said on the final day of the Women Deliver Conference.