“New countries and other partners are stepping up. But all must deliver on commitments - on official development assistance, climate finance and domestic resource mobilization,” Mr. Ban told journalists at the UN Headquarters in New York, where he launched the 2013 MDG Gap Task Force Report.

The annual report – prepared by the Task Force created in 2007 to track global commitments on aid, trade and debt, and to follow progress on access to essential medicines and technology – shows that the international community must recommit to increasing aid and reaching an agreement on development-oriented multilateral trade.

The report, ‘The Global Partnership for Development: The Challenge We Face,’ shows that developing countries gained greater access to technologies, markets for their exports, some essential medicines and greater debt relief.

In his remarks, Mr. Ban also noted that tariffs on exports from developing countries are down while volume is up, and some products from the least developed countries are admitted duty free.

Access to mobile phone technology and the internet continue to rapidly expand, with some medicines, such as those to treat HIV/AIDS, becoming more affordable.

“However, much more needs to be done,” Mr. Ban said at the launch, which comes amid 1,000 days of action to spur progress towards the MDGs.

“While global economic trends are slowly improving, the crisis continues to take a toll,” he said. “For the first time in a long while, official development assistance (ODA) has fallen for two consecutive years.”

ODA declined four per cent in 2012, down to $125.9 billion from $134 billion in 2011, mainly due to fiscal austerity measures by countries in the European Union, according to the report.

Mr. Ban urged donor countries to continue to strive for, or surpass, the ODA target of 0.7 per cent of gross national income, particularly to the least developed countries (LDC).

“What we saw last year is actually a little bit of a trend that the global partnership, the agreement, the contract, between the north and the south when it comes to the willingness and commitment of the North to support his historic effort, we see signs of eroding or become weaker,” said Olav Kjørven, Assistant Secretary-General and Director of the Bureau for Development Policy at the UN Development Programme (UNDP) which co-chairs the Task Force along with UN Department of Economic and Social Affairs (UN-DESA).

“The most important message for me coming out of this report is let’s turn this around,” Mr. Kjørven said. “Let’s stop this erosion, let’s stop this backsliding when it comes to aid commitments… and show that we’re serious about this global partnership for the last two years until the milestone of 2015.”

According to the report, several important targets have been met and are likely to be met by the target year of 2015 as a result of collective efforts by the international community, governments, private sector, civil society and other stakeholders.

However, the report calls for bolder action in areas such as pollution, child and maternal health, HIV prevention and basic education.

“These are areas where both qualitatively and quantitatively more progress is needed,” said Shamshad Akhtar, Assistant Secretary-General for Economic Development at UN-DESA, who also addressed journalists at the press conference.

Among the recommendations she outlined from the report was a call for freer and fairer movement of goods, services and labour.

The Doha Round of global trade negotiations remains stalled after more than a decade, according to the report. However, the Ninth Ministerial Conference of the World Trade Organization, which will take place in Bali, Indonesia, in December 2013, is an “opportunity to break the impasse”, the authors wrote.

The report, she said, recommends that an international working group be convoked to study options to enhance the international architecture for debt restructuring.

She also noted the need for pharmaceutical companies to make medicines “affordable, accessible and improve their quality”, adding that patients in developing countries have to pay three to six times the international reference price, if they are available.

The Task Force Report was issued ahead of the annual high-level General Assembly meetings next week where the MDGs are due to top the agenda.

In August, Mr. Ban outlined his vision for ‘bold’ action to achieve the MDGs by the 2015 deadline and a post-2015 sustainable development agenda in the report, ‘A Life of Dignity for All.’ The UN chief has said he would officially launch the report on 25 September. 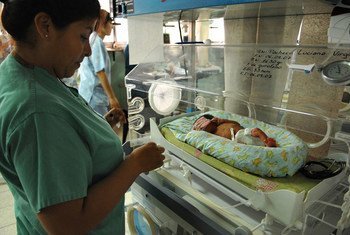 21 August 2013
Ahead of an upcoming special General Assembly event next month on efforts by United Nations Member States to meet the Millennium Development Goals (MDGs) and to define a new universal development agenda, Secretary-General Ban Ki-moon has released a report, A Life of Dignity for All, containing his updates on the Goals and vision for the road ahead.