OCHA
An Israeli settlement viewed from the Um-al-Kher bedouin community in the West Bank.
27 August 2013

The United Nations human rights office today expressed concern over the forced eviction of Palestinians in the West Bank as a result of recent demolitions carried out by Israeli authorities, and noted this could amount to a violation of international law.

The demolitions began on 19 August and have been carried out by Israeli authorities in at least six different locations, including East Jerusalem, the Office of the UN High Commissioner for Human Rights (OHCHR) said.

In one incident, Israeli authorities demolished all of the structures in the Bedouin community of Tel al Adassa in East Jerusalem, rendering some 39 people homeless, citing a lack of building permits.

“No alternative locations or housing options were offered. Left with no choice, the community has split and moved to two different temporary locations, where they remain vulnerable to further demolitions and repeated displacement due to lack of legal security of tenure and inability to obtain building permits.”

Ms. Pouilly said the permanent removal of the families from Tel al Adassa may amount to a violation of the prohibition to forcibly transfer individuals or communities under article 49 of the Fourth Geneva Convention. The case also raises concerns regarding the prohibition of forced eviction under international human rights law, and the right to adequate housing and freedom from arbitrary or unlawful interference with privacy, family and home.

“While we do not yet have sufficient information to make an assessment of each of these specific cases, we have raised our concerns several times before, including in our reports, regarding the excessive use of force by Israeli security forces in law enforcement operations in the West Bank,” Ms. Pouilly said.

She added that the Israeli Government has the obligation to investigate all cases in an independent and impartial manner and hold accountable all those responsible for violations. OHCHR also urged Israeli authorities to publish its findings on the matter. 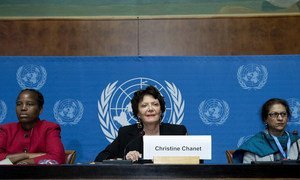