Jean-Marc Ferré
Khawla Mattar, Spokesperson for the Joint Special Representative of the UN and the League of Arab States for Syria, Lakhdar Brahimi.

27 August 2013
An international conference to resolve the crisis in Syria will take place “at some point,” the Joint Special Representative of the United Nations and the League of Arab States has said, reaffirming his belief a political solution, and urging all partners to the negotiating table.

Speaking to journalist in Geneva, his spokesperson, Khawla Mattar, said Lakhdar Brahimi is “still confident that Geneva II [conference] would take place at some point.” She added that the conference will not be held in September, as originally thought, given the events and developments on the ground.

“All his team here, in Damascus and in New York are working to bring the two partners to the negotiating table and go through a political solution to convince the partners that there is no such thing as military solution to this war,” Ms. Mattar noted.

A meeting scheduled for tomorrow between Russia and the US had been “postponed, not cancelled”, Ms. Mattar said.

Mr. Brahimi expressed hope that the three partners who initiated the whole process would “be able to sit down and agree on the details” of the second round of the Syrian Peace conference, his spokesperson said.

Part of his role had actually been to bring them closer to each other in understanding on how to go forward and would continue to do that in order to have the conference “sooner rather than later,” she added.

She added that Mr. Brahimi thought that the recent escalation and accusation of the use of chemical weapons were actually proof to the whole world that more of it would only create a more complex solution.

“The only solution is to go to the negotiating table for a political solution,” Ms. Mattar said quoting the special envoy.

Also today, the top United Nations political official, Jeffrey Feltman, met with senior officials in Iran to discuss how that country, given its regional influence and leadership, can help bring the players in the Syrian crisis to the table.

Briefing on the UN’s preparation for the Geneva II conference, Mr. Feltman emphasized that the UN rejected a military approach to the crisis and expressed appreciation for statements from Iranian officials that the country is committed to facilitating a political solution.

They also discussed the alleged use of use of chemical weapons in Syria, and how the UN can work together with Iran and other states to end the conflict, among other topics. 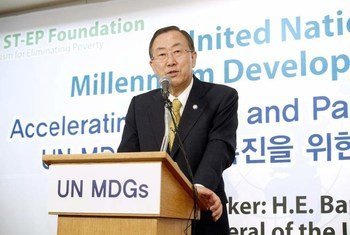 23 August 2013
The use of any chemical weapons in Syria would amount to a “crime against humanity” and there would be “serious consequences” for the perpetrators, Secretary-General Ban Ki-moon said today, while urging an immediate investigation on this matter.