UN Photo/Eskinder Debebe (file photo)
Ake Sellström, head of the UN technical mission to investigate the possible use of chemical weapons in Syria.

27 August 2013
The United Nations inspectors probing the possible use of chemical weapons in Syria postponed a visit to a second site today so the team’s safety could be ensured, the world body announced, as Secretary-General Ban Ki-moon once again urged all parties to cooperate with the investigation.

“Considering the complexities of the site, confirmation of access has not been obtained but is expected later today,” a UN spokesperson told journalists.

Secretary-General Ban Ki-moon today reiterated that the Organization is in Syria to assist, but that it needs the cooperation of all in order to fulfil the mandate given by UN Member States.

He once again urged all sides in the conflict to give safe passage and access to the Team.

“It is in the interest of all sides to bring factual evidence and clarity to a situation which has brought great suffering to the people of Syria,” Mr. Ban said in a note to journalists.

The team, led by Swedish scientist Dr. Åke Sellström, was delayed yesterday by sniper fire but was able to return to the original site later in the day. No one was hurt during the incident.

Mr. Ban had said that the UN will register a strong complaint with the Government and opposition authorities about an attack “so the safety…of the investigation team will be secured.”

The Team is working in cooperation with the Organization for the Prohibition of Chemical Weapon (OPCW) and the three staff members from the UN World Health Organization (WHO) focused on public health, epidemiology and clinical management.

They are spending up to 14 days, with a possible extension, probing the alleged use of chemical weapons by the Government at Khan al-Asal, as well as two other allegations reported by Member States.

Those could include 21 August alleged use of chemical weapons in the Ghouta area outside Damascus. The attack reportedly killed more than 300 civilians including children.

Mr. Ban has formally requested the Government of Syria to grant the Team permission and access to swiftly investigate the incident. He expects to receive a positive response without delay, his spokesperson has said.

A delay in accessing the site is not believed to negatively affect the investigation. Speaking to journalists in New York, a UN spokesperson said that “with hundreds of human fatalities, the passage of such few days does not affect the opportunities to collect valuable samples and to perform witness interviews.”

For example, Sarin can be detected in biomedical samples up to months following its use, he added.

Meanwhile, WHO today said it would issue interim guidance for treating victims of chemical weapons attacks.

The UN health agency said its new guidance include very specific information for healthcare workers on the identification of contaminated patients, recommendations on personal protection, procedures for decontamination, and guidance for triage and identification of categories of exposure and treatment.

“It was not a coincidence that the new interim guidelines were being published this week,” spokesman Glenn Thomas told journalists in Geneva. “WHO had rushed the guidance out – which is why it was called an interim guidance document.” 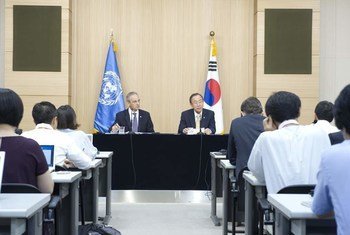 26 August 2013
The team of United Nations inspectors probing the possible use of chemical weapons in Syria spent its first day in the suburbs of Damascus at the site of the alleged incident, interviewing witnesses, survivors and doctors, and collecting samples, Secretary-General Ban Ki-moon announced today.