The flight, chartered by the World Food Programme (WFP), includes 340 family tents, 42 metric tonnes of high energy biscuits and 15 metric tonnes of special nutrition bars contributed by the US Agency for International Development (USAID). The supplies will be distributed by WFP and the Office of the UN High Commissioner for Refugees (UNHCR).

“The continuing exodus of people fleeing Syria into Iraq over the last month has been unprecedented,” said UNHCR Representative in Iraq Claire Bourgeois. “With the support of the government of the Kurdistan Region, UNHCR, WFP and our partners are in a race against time to meet the needs of the tens of thousands of new arrivals.”

Over the past two weeks, more than 44,000 Syrian refugees have crossed into the Kurdish region of northern Iraq. Most of them are women and children sheltered in camps or collective facilities while others reside with family and friends.

A second flight is due to arrive in Erbil today from Adana, Turkey, carrying 93 metric tonnes of food, enough to feed 11,500 people for three weeks. In addition to the flights, WFP is mobilizing more than 37,000 rations from around the region to feed up to 185,000 people for one month. Some 25 trucks carrying 500 metric tonnes of food supplies arrived Monday from Turkey to meet the urgent food need of refugees.

In a news release, UNHCR and WFP said most of the newly arrived Syrians have been transferred to Kawergosk camp, close to Erbil, which is now home to an estimated 15,000 refugees.

“In the last 12 days, aid workers have turned the desolate Kawergosk site from an empty plain into a burgeoning refugee camp that now must be prepared for northern Iraq’s rough winters,” the agencies said.

UNHCR has so far sent over 120 trucks of aid to camps and various centres hosting new arrivals, with more relief being dispatched from the agency’s stockpiles in Jordan. Meanwhile, WFP has distributed more than 1,500 family food rations, enough to feed 7,500 people for one month, in Kawergosk camp over the last few days. The ration includes rice, sugar, salt, wheat flour, lentils, and vegetable oil.

“We are grateful for the generosity of the local authorities of the Kurdistan Regional Government who provided the Syrian refugees with hot meals in the initial days, when they arrived in northern Iraq,” said Ute Meir, WFP’s acting Country Director in Iraq. “WFP has now mobilized enough food to meet most of the urgent food needs of Syrian refugees in camps and transit centres in northern Iraq.”

UNHCR is also assisting some 3,000 people temporarily encamped at the Baharka warehouse, also in Erbil, as well as about 2,600 Syrians living in schools and other buildings in Qushtapa. Temporary sites are being set up to accommodate those living in mosques, schools and libraries, the agency said.

Almost 200,000 Syrian refugees have fled into Iraq since the onset of the conflict in Syria on March 2011, with some 30 per cent residing in camps and 70 per cent living in Iraqi communities. 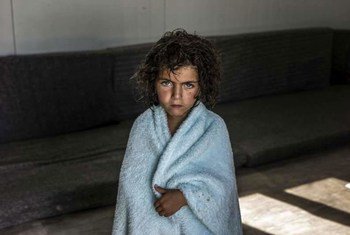 23 August 2013
Three years of bloodshed in Syria have driven one million children from their homeland, United Nations agencies said today as they marked this “shameful milestone” by urging the entire international community to do more to help end the conflict and protect the well-being of “a generation of innocents.”