15 August 2013
The deadly violence in Egypt, the ongoing Syria crisis and the Israeli-Palestinian peace process were on Secretary-General Ban Ki-moon’s agenda as he arrived today in the Middle East, where he held talks with leaders in Jordan as well as with Palestinian officials in Ramallah, before heading to Israel.

In Jordan, Mr. Ban expressed his gratitude to the Government and people of the country for their generosity in hosting over half a million Syrian refugees at a time when its ability to absorb more people was overstretched.

Both the Secretary-General and King Abdullah recognized that it was critical for the international community to share the burden that Jordan is carrying, according to a read-out of their meeting in the Red Sea resort of Aqaba.

They also discussed yesterday’s violence in Egypt, with Mr. Ban noting the need to move forward with a political process and genuine reconciliation in the country.

The efforts by United States Secretary of State John Kerry to resume negotiations between Israel and the Palestinians were also discussed in their meeting, as well as in Mr. Ban’s meeting with Foreign Minister Nasser Judeh. The Secretary-General commended Jordan’s efforts in recent years to get the Israeli-Palestinian dialogue back on track.

Mr. Ban then travelled to Ramallah in the West Bank, where he held talks with Palestinian President Mahmoud Abbas, Prime Minister Rami Hamdallah and Minister of Prisoner Affairs Isaa Qaraqe.

Among the issues discussed was the start of direct negotiations, as well as the situation on the ground in the occupied Palestinian territory, including the continuing settlement activity and the need for the international community to provide additional support to the Palestinian Authority.

“A viable Palestinian state is long overdue,” Mr. Ban said at a press encounter with Mr. Abbas. “There is renewed hope thanks to the commitment of the Palestinian and Israeli leadership. This must be sustained.”

The Secretary-General said he remained “deeply troubled” by Israel’s continuing settlement activity in the West Bank, including East Jerusalem. “Settlement activity is deepening the Palestinian people’s mistrust in the seriousness on the Israeli side towards achieving peace. It will ultimately render a two-State solution impossible,” he told reporters.

While welcoming the release of 26 Palestinian prisoners, Mr. Ban voiced concern about the fate of some 5,000 others who remain in Israeli jails. “They should either be tried or released,” he stated.

He also noted that the deteriorating humanitarian situation in Gaza has an adverse impact on its civilian population, and emphasized the importance of access through legitimate crossings, while also addressing Israel’s legitimate security concerns.

While in Ramallah, the Secretary-General also took part in a Model UN event, with a video link to Gaza. He will attend a similar Israeli event on Friday. He also launched a new UN Development Assistance Framework that outlines how the world body works with the Palestinian Authority, and visited the grave of Yasser Arafat.

From Ramallah, Mr. Ban travels to Jerusalem for meetings with Israeli leaders later today and tomorrow. 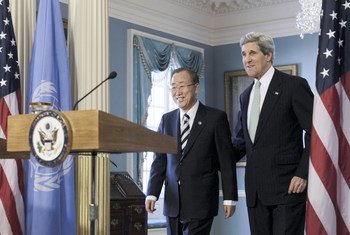