25 June 2013
With the Middle East once again suffering through “dangerous and tragic days,” a senior United Nations political official today urged the Security Council and the wider international community to maintain steadfast in support of peace and help reverse “negative dynamics” that have seen the crisis in Syria deepen and the Israeli-Palestinian peace process come to a standstill.

“The scourge of war is, once again, destroying lives and burying hopes,” said Assistant Secretary-General Oscar Fernandez-Taranco in his briefing to the Council on the situation in the Middle East, where he said the current raft of challenges is putting the principles and values of the UN Charter “to a hard test.”

“But however difficult the task, this Council and the United Nations at large cannot give up and cannot let a sense of collective impotence erode our sense of responsibility,” he declared

Mr. Taranco noted that the settlement restraint in the West Bank “has seen signs of unravelling,” with Israel releasing data that during the first quarter of 2013 there was a 176 per cent increase in the start of housing units in settlements, which violates international law and undermines the two-State solution.

In addition, violence between Palestinians and settlers continue in the West Bank, rocket attacks from Gaza to Israel, clashes during Palestinian protests in the occupied West Bank, and the encroachment of human operations in Gaza, all have contributed to mounting tensions in the region, Mr. Taranco said.

He also drew attention to a joint UN survey that says food security affects some 1.6 million Palestinians in the West Bank and Gaza, and has increased to include 24 per cent of households in 2012.

“The only possible way forward is the full implementation of the ceasefire understanding reached on 21 November under Egyptian auspices,” he said, adding that the international community must work on a substantive framework to bring the parties back to the table.

“There is also a need for a conducive environment on the ground, including confidence building steps. However, while substantive progress is urgently needed, rushing the parties back to the table without having the necessary framework in place and buy-in from both sides would be counterproductive,” Mr. Taranco said, calling on Israeli Prime Minister Benjamin Netanyahu and Palestinian President Mahmoud Abbas to “recognize a partner on each other and finally negotiate and achieve the two-State solution.”

Regarding Syria, Mr. Taranco warned the situation continues to deteriorate due to violent military confrontation. He expressed concern over the direct involvement of Hizbollah fighters inside of Syria, and underlined that increased military support to both sides only promises further escalation of the conflict.

“The Secretary-General has repeatedly stressed his opposition to the transfer of arms and fighters to either side inside Syria,” he said. “Only a political solution can bring the violence and the suffering of the Syrian people to an end.”

Since the conflict began in 2011, more than 93,000 people have been killed, some 1.7 million displaced, and more than 6.8 million are in need of humanitarian assistance, including more than 3 million children.

Mr. Taranco noted that the negative impact of the conflict on neighbouring Lebanon has been more sharply evident in recent weeks, and reiterated the importance of Lebanon adhering to the Baabda Declaration – which seeks to keep Lebanon neutral from regional developments – and the commitment of Lebanese leaders to prevent a dangerous spillover of the conflict.

Addressing these pressing challenges will require courageous and mutual compromises at a national, regional and international level, Mr. Taranco told the Security Council, emphasizing that it should be done through peaceful means and not violence. 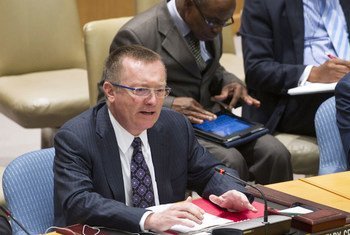