1 July 2013
Wrapping up a visit to reaffirm the United Nations support for Afghanistan, Deputy Secretary-General Jan Eliasson praised the country’s progress and said the Afghan people “must not fall back into the nightmares of war, extreme poverty and violations of human rights."

“I conveyed to all of my interlocutors that the UN is committed to continued partnership with Afghanistan, provided that this is the wish of the Government and the Afghan people. We will provide our support where and when needed, and following modalities that respect Afghan leadership and sovereignty,” the Deputy Secretary-General added.

During the visit, Mr. Eliasson had met with President Hamid Karzai and his advisors, as well as the Speakers of the Parliament from both Houses – the Wolesi Jirga and the Mesherano Jirga.

Visiting the southern part of the country, Mr. Eliasson met with Governor Tooryalai Wesa of Kandahar, as well as women’s groups and other activists. He also held discussions with members of the group appointed by President Karzai to negotiate with the Taliban the High Peace Council, and with Independent Electoral Commission to discuss the upcoming vote.

“I am here in Afghanistan at a very important moment in its contemporary history,” Mr. Eliasson said, noting that the international security assistance force (ISAF), is due to pull out at the end of next year, following a presidential election to be held on 5 April 2014.

The election next year is “a make or break event,” Mr. Eliasson said. “It will be of historic significance that the election is free and fair, and of course, that there is good participation in the election.”

With voter registration underway, the UN deputy chief said he was concerned not many women in Kandahar had registered so far and many were not planning to vote.

Mr. Eliasson travelling to the regions, with Mr. Kubiš, during a five-day visit to Afghanistan. UN Photo/Fardin Waezi

“I hope that the Government of Afghanistan will, together with their regional counterparts, really come out with the message of the importance of this vote,” Mr. Eliassson said.

He added that the vote was also an important assurance for the international community “that democracy is the road ahead” and that the gains made during the past decade, particularly on women’s issues and other human rights, ought to be preserved.

The Afghan House of Parliament, known as the National Assembly, is currently finalizing two pieces of legislations governing the legal framework of future elections. The first of the two laws defines the structure and responsibilities of the country’s Independent Election Commission (IEC), while the second concerns the main electoral law governing all future Afghan elections.

The laws are expected to create a strong legal foundation for the holding of credible polls in Afghanistan, and their passing is reportedly tied up due to differences over provisions contained within them.

Mr. Eliasson said that President Karzai had assured him that he would sign on to the agreement among the Houses.

The Deputy Secretary-General’s visit came amid a series of attacks in June, including a suicide bombing near the country’s Supreme Court building and a separate attack on President Karzai’s palace.

From the beginning of the year until 6 June, more than 1,000 civilians have been killed and more than 2,000 injured, which is a 24 per cent increase in civilian casualties compared to the same period in 2012, according to a recently released UNAMA civilian casualty report.

“It has been a very difficult period. Many of the Afghan people are living under still very poor conditions and unfortunately with still deep insecurity,” Mr. Eliasson said stressing that a political solution must be supported with the Taliban.

“If we, inside the United Nations, can at any stage of this process play a meaningful role, we are prepared to do so,” he stressed.

He also noted the important links between peace and development in Afghanistan: “There is no lasting peace or sustainable development without respecting human rights. I would add today also the rule of law.”

The international conference in Tokyo on Afghanistan’s civilian needs and a separate meeting in Chicago focused on security matters respectively raised $16 billion and $4.1 billion

An additional $471 million humanitarian appeal for Afghanistan is only around 40 per cent funded at $179 million.

“United Nations is now at a crucial stage of the developments inside Afghanistan,” Mr. Eliasson said, adding that UN agencies, funds and programmes which comprise the UN Country Team in Afghanistan need to be very flexible, react rapidly and present solutions around the problems.

He noted that now is the time for the UN to deliver. “If the United Nations plays this role constructively, actively and the people of Afghanistan can see that there is a difference, this makes a difference in their lives. Then, we have done something very important.”

“If we, on the other side, fail to coordinate and it takes too long to deliver something on the ground, we may miss a very important moment,” Mr. Eliasson continued. 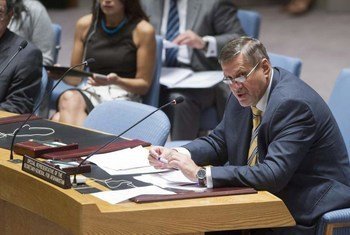 20 June 2013
Sustained international support is critical as Afghanistan proceeds with three complex and intertwined transition processes – political, security and economic – that are due to culminate next year, the top United Nations envoy to the country told the Security Council today.