UNEP
Buying Illegal Ivory is Killing Me': One of the posters from the Shanghai campaign.

1 July 2013
Large-screen displays and posters of endangered animal species are being displayed at metro stations in Shanghai, China, as part of a United Nations-backed campaign to send a message to millions of travellers about the damage caused by demand for illegal wildlife products.

One of the powerful images shows an elephant in black and white, with the quote “Buying Illegal Ivory is Killing Me,” along with basic data on illegal poaching and how this is affecting animal species around the world.

“Public awareness was a key factor behind the reduction in the demand for ivory in North America and Europe in the 20th century, and it can play its part in reducing the illegal wildlife trade today as demand moves to emerging markets,” said the Director of the UN Environment Programme’s (UNEP) Division of Communications and Public Information, Nick Nuttall.

“The fact is that many consumers in places like Asia are simply unaware that products like illegally sourced ivory and rhino horn come at a terrible price to the species and communities concerned.”

Demand for illegal ivory remains highest in Asia, particularly China, which has led to spike in elephant killings in Africa, which are now at their highest levels in around a decade. Data from the Convention on International Trade in Endangered Species (CITES) monitoring programme shows that 17,000 elephants were illegally killed in 2011. This figure is believed to be a significant underestimation.

The surge in killings is threatening the future of some elephant populations and the livelihoods of millions of people linked to tourism, UNEP said in a news release.

As part of their strategy to address the issue, UNEP and CITES partnered with Shanghai authorities to put up posters in the city’s metro network – one of the busiest in the world, which carried almost 2.3 billion passengers last year.

“This exhibition is about education and awareness-raising on the reality behind many of the carvings and materials sourced from the wild animals concerned, which in turn can catalyze the power of the consumer to change the future at this crucial juncture,” said Mr. Nuttall.

Actress Li Bingbing, one of China’s most-popular celebrities and a rising Hollywood star, who is also a UNEP Goodwill Ambassador, has urged greater effort by governments and consumers to combat illegal wildlife trade.

Speaking during a visit to Kenya in May, Ms. Li said citizens and the business community in Asia can play a crucial role in preventing the illegal killing of elephants in Africa by saying ‘no’ to ivory products.

“The current poaching crisis raises major concerns about the survival of elephants and rhinos here in Kenya,” she said. “But there are also other, far-reaching impacts. Illegal killings of elephants are being linked to organized crime and the funding of armed militia groups. Many consumers in Asia do not realize that by buying ivory, they are playing a role in the illegal wildlife trade and its serious consequences.” 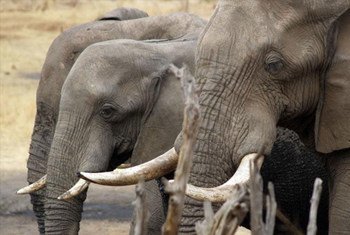 17 May 2013
Eight countries identified as being the most affected by the illegal trade in elephant ivory have submitted national action plans to the United Nations-backed treaty for the conservation of endangered species containing measures to combat the scourge.