1 July 2013
Innovations in science and technology will be vital for tackling today’s global challenges, from reducing poverty to ensuring sustainable development, top United Nations officials stressed, as they kicked off the annual substantive session of the Economic and Social Council (ECOSOC).

Innovations in science and technology will be vital for tackling today’s global challenges, from reducing poverty to ensuring sustainable development, top United Nations officials stressed, as they kicked off the annual substantive session of the Economic and Social Council (ECOSOC).

“Science, technology, innovation and culture can significantly impact each of the three dimensions of sustainable development – economic, social and environmental,” said the President of ECOSOC, Ambassador Néstor Osorio of Colombia.

“They present huge opportunities. But effectively channelling them for sustainable development also poses significant challenges,” he added, addressing the opening in Geneva of the high-level segment of the 2013 session of the central UN forum for discussing global economic and social issues.

While ECOSOC’s substantive session runs from 1to 26 July, Government ministers, private sector leaders and heads of UN agencies, funds and programmes are meeting for the next four days for the high-level segment, which this year is focusing on science, technology and innovation, or STI.

“The steadily increasing pace of technological innovation makes ours an era of a long profound change… So many fields of human endeavour – medicine, energy, agriculture – have made significant, even drastic, improvements in just a few generations,” noted Mr. Osorio.

“Yet, in the field of development, despite our progress, there are still over one billion people living in extreme poverty. And tonight many, if not most, will go to bed hungry,” he added.

Secretary-General Ban Ki-moon (right) with President Ueli Maurer of Switzerland at the opening of the high-level segment. UN Photo/Anne-Laure Lechat

“This raises the question: How can the world’s intelligence, creativity and energy – the kind that brought us smart phones, digital imagery and the global positioning system – be fostered and harnessed to address today’s major development challenges?”

The need for innovation is clear, Secretary-General Ban Ki-moon told participants. “Every development success has drawn in large measure from absorbing knowledge, technology and ideas and adapting them to local conditions. In other words, by innovating.”

He added that many solutions for sustainable development are waiting to be scaled up, but this requires the right incentives and ensuring that knowledge and information are shared in a collaborative, open and problem-solving manner.

The Secretary-General noted that the Millennium Development Goals (MDGs) have been one of the greatest innovations in the history of development work. The Goals set specific targets on poverty alleviation, education, gender equality, child and maternal health, environmental stability, HIV/AIDS and malaria reduction, as well as a global partnership for development, all with a deadline of 2015.

A progress report launched today shows that while a number of successes on key MDG targets have already been met, or are within close reach by 2015, serious challenges remain.

“We must intensify our efforts, particularly to tackle the disparities across regions and between different social groups… The future we want is within reach. Let us innovate together to achieve it,” Mr. Ban stated.

Speaking at the launch of the ECOSOC Innovation Fair 2013, the Secretary-General said the event highlights important contributions for solving some of the most pressing development challenges.

Vuk Jeremić, President of the UN General Assembly, said at the opening of the high-level segment that the ever-increasing interdependence at the global level, brought about by new forms of communication, required a stronger commitment by Member States to work in concert to face challenges and advance the greater good of the world.

A revitalized General Assembly and a reformed ECOSOC could lead the UN in setting the world on a more equitable, prosperous and environmentally sound path, he added.

The four-day segment will also feature the Annual Ministerial Review, which this year will focus on international goals and commitments, as well as discussions on the Council’s role in shaping the post-2015 development agenda. In addition, a policy dialogue will be held between the UN, the World Bank, the World Trade Organization and the International Monetary Fund on current developments in the world economy.

Also, five countries – France, Nigeria, Peru, Thailand and Viet Nam – will give national voluntary presentations on their progress in implementing the internationally agreed development goals, including the MDGs, and the role of science, technology and innovation, as well as culture, as part of this process. 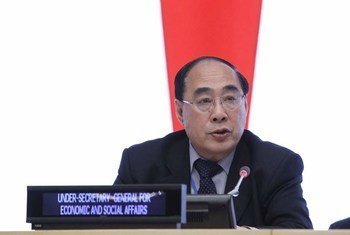