UN Photo/Violaine Martin
Joint Special Representative for Syria, Lakhdar Brahimi, at meeting in Geneva with senior officials of the United States and Russia.

5 June 2013
Further steps have been taken towards the convening of an international conference on Syria but it will not be possible to hold it this month as planned, the Joint Special Representative of the United Nations and the Arab League for Syria, Lakhdar Brahimi, said today.

Further steps have been taken towards the convening of an international conference on Syria but it will not be possible to hold it this month as planned, the Joint Special Representative of the United Nations and the Arab League for Syria, Lakhdar Brahimi, said today.

“There is still a lot of work to do to bring a conference about. For this reason, we have come to the conclusion today that it will not be possible to hold this conference in June,” Mr. Brahimi told reporters in Geneva following talks with senior United States, Russian and UN officials.

“We will be continuing our consultations with Russia and the United States to see about windows of opportunity to hold the conference as soon as possible – hopefully, in July,” he said, adding that the three parties will meet again in the Swiss city on 25 June.

“The situation in Syria is absolutely tragic,” Mr. Brahimi stated. “I think it is embarrassing for us that we are not capable of holding this conference already.”

At the same time, he explained that the opposition still has work to do to prepare for the conference and to put together a delegation that is acceptable to the various opposition groups. “Obviously, the conference can’t take place without them,” he said, adding that a major sticking point is that the Syrian sides “are not ready.”

Russian and US officials announced last month their intention to convene an international conference to find a political solution to the Syria crisis, which has claimed more than 70,000 lives since fighting between the Government and opposition forces seeking to oust President Bashar Al-Assad began in March 2011. The crisis has also left 6.8 million people in need, and sent over 1.5 million Syrians fleeing to neighbouring countries to seek refuge.

“We all firmly agreed that a political solution to the crisis in Syria is the only solution possible… The catastrophe on the ground is alarming,” said Mr. Brahimi. “That tragedy has got to come to an end, for the sake of Syria and its people.

He said that the parties meeting today have agreed that the ‘Geneva Conference on Syria’ will be held under the auspices of the UN Secretary-General, with Russia and the US playing an important role throughout the process.

The goal of the conference, he added, will be to achieve a political solution to the conflict in Syria through a comprehensive agreement between the Government and the opposition for the full implementation of the Geneva communiqué of 30 June 2012.

Issued after a meeting of the Action Group for Syria, the document lays out key steps in a process to end the violence. Among others, it calls for the establishment of a transitional governing body, with full executive powers and made up by members of the present Government and the opposition and other groups, as part of agreed principles and guidelines for a Syrian-led political transition.

Meanwhile, yesterday, the Independent International Commission of Inquiry on human rights in Syria released a new report stating that the violence has reached new levels of brutality and that there are reasonable grounds to believe that chemical agents have been used as weapons by both the Government and opposition forces.

In a statement issued today, Secretary-General Ban Ki-moon’s spokesperson said the Syrian Government has not granted access to the separate fact-finding team investigating the use of chemical weapons in the country.

“The Mission has continued to monitor developments and collection of information available off-site,” the statement said.

The head of the investigative probe, Åke Sellström, recently visited London and Washington DC. He also received additional information from the French Government related to the use of chemical weapons.

“Mr. Sellström cautions that the validity of the information is not ensured in the absence of convincing evidence of the chain-of-custody of the data collected,” the statement said.

“In this regard, [Mr. Ban] reiterates his belief that on-site activities are essential if the United Nations is to be able to establish the facts.” 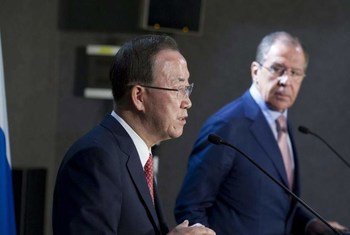 17 May 2013
Stressing that a political solution is the only way to end the Syria crisis, Secretary-General Ban Ki-moon said today that an international conference proposed by Russia and the United States should be held as soon as possible so as not to lose momentum.