17 May 2013
Stressing that a political solution is the only way to end the Syria crisis, Secretary-General Ban Ki-moon said today that an international conference proposed by Russia and the United States should be held as soon as possible so as not to lose momentum.

“It is my sincere hope that we can convene an international conference on Syria as soon as possible to help parties come to the negotiating table,” Mr. Ban said at a joint press conference in Sochi with Russian Foreign Minister Sergey Lavrov.

Last week, following talks in Moscow between Mr. Lavrov and US Secretary of State John Kerry, the two countries announced they would work together to achieve a political solution to the Syria crisis, and agreed to convene an international conference aimed at achieving this goal.

“I thanked the Foreign Minister for working with US Secretary of State Kerry on finding a way forward,” said Mr. Ban. “Now our challenge is to build on the momentum that Foreign Minister Lavrov and Secretary Kerry have helped to generate.”

He added that although a date for the conference has not yet been set, it should take place soon. “We will try to fix a date as soon as possible. We should not lose this momentum generated by Minister Lavrov and Secretary Kerry. There is high expectation that this meeting should be held as soon as possible.”

Since March 2011, fighting between the Syrian Government and opposition forces seeking to oust President Bashar Al-Assad has killed more than 70,000 people, and left 6.8 million people in need. In addition, the UN High Commissioner for Refugees (UNHCR) announced today that the number of Syrian civilians who have fled their country to escape conflict has passed the 1.5 million mark.

“The crisis in Syria is first and foremost on our minds,” Mr. Ban stated. “I am deeply concerned about the ongoing violence and the terrible impact on millions of civilians.”

The Secretary-General and Mr. Lavrov also discussed how the Syria crisis is affecting the wider region, including countries such as Lebanon and Jordan. They also exchanged views on a number of other issues, including the Middle East peace process, the situation in Afghanistan, climate change, and the situation on the Korean peninsula.

Mr. Ban also discussed these issues today with President Vladimir Putin, with whom he underscored the importance of the strong partnership between the UN and Russia. He commended the emphasis Russia places on multilateral diplomacy in addressing key global challenges, according to a read-out of the talks.

The Secretary-General congratulated Mr. Putin and his Government on working to ensure the successful organization of the 22nd Winter Olympic and Paralympic Games, which will be held next year in Sochi on Russia’s Black Sea coast.

Referring to the upcoming summit of the Group of 20 (G20) leading economies, to be held in the Russian city of St. Petersburg, Mr. Ban said he was encouraged that participants will discuss, along with other issues, sustainable development, inclusive economic growth and financial stability. “I’m sure that the G20 leaders will make great contributions on this,” he said in his opening remarks at the meeting with Mr. Putin.

Mr. Ban is expected to wrap up his visit to Russia on Sunday and then travel to Mozambique. 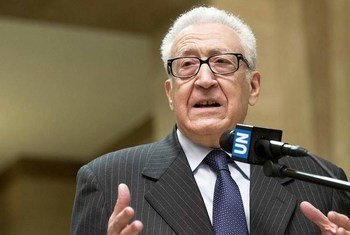 8 May 2013
Secretary-General Ban Ki-moon and the Joint Special Representative of the United Nations and the Arab League for Syria, Lakhdar Brahimi, today welcomed the statements by Russia and the United States that they would work together to achieve a political solution to end a conflict that has claimed more than 70,000 lives over the past two years.