5 June 2013
Sport is a valuable vehicle to reach peace and development objectives, including health, education and gender equality, Secretary-General Ban Ki-moon said today at an international forum in New York.

“The link between sport, peace and development grows stronger by the year,” Mr. Ban said at the third International Forum on Sport for Peace and Development. “I am happy to see more Governments using sport and physical activity as a tool for social and economic development.”

“By working as a team we can use the power of sport to build the peaceful, prosperous future we want,” he added

Mr. Ban highlighted various initiatives throughout the UN system, which have embraced sports as a way to reach their goals. For example, UN peacekeeping operations use sport as a tool for peacebuilding and reconciliation and the Office of the High Commissioner for Refugees (UNHCR) have sports and education programmes that promote tolerance and understanding among displaced children and youth.

In addition, the UN Office on Drugs and Crime (UNODC) uses sport for raising awareness about the importance of a healthy, drug-free lifestyle.

Other UN entities such as the UN Population Fund (UNFPA) and the UN Development Programme (UNDP) are working with sports personalities to raise awareness about the eight anti-poverty targets known as the Millennium Development Goals (MDGs) which seek to slash poverty, promote education, gender equality, child and maternal health, environmental stability, HIV/AIDS reduction and a Global Partnership for Development – all by a deadline of 2015.

Mr. Ban also drew attention to the close ties between the UN and the International Olympic Committee (IOC), which work together during the Olympic Games in various capacities. For the previous Summer Games in London, the UN Environment Programme (UNEP) worked in partnership with the IOC to make it an environmentally sustainable event, and the Joint UN Programme on HIV/AIDS (UNAIDS) held an advocacy event to raise awareness about AIDS and how to avoid HIV infection.

The Secretary-General himself participated in the Olympic Torch relay and carried the Olympic flag into the stadium at the opening ceremony of the 2012 London Games.

“Peace, dignity, equality, justice, fairness […] a better world for all. This is what our two organizations stand for,” Mr. Ban said noting the shared values between the Olympic ideals and the UN Charter.

Mr. Ban also praised the IOC for its work on its work on behalf of people with disabilities. “The London Paralympic Games inspired millions around the world. The International Paralympic Committee has done excellent work over years to break down negative stereotypes and build positive attitudes. It is important that we work to build societies where all people, no matter their disability, can enjoy the right to play sports – and live their lives – in safe, inclusive environments.”

In a ceremony this morning, Mr. Ban accepted the Olympic Order Award on behalf of the UN, and reiterated his commitment to strengthen the partnership between the world body and the IOC. He also inaugurated an Olympic display at UN Headquarters, where the Olympic torch he carried will be on show.

The display will be expanded into an exhibition on Sport for Development and Peace, to “showcase the power of sport for helping to create the world we want – a peaceful, sustainable world of equality and opportunity,” Mr. Ban said, adding: “A world where every girl and boy, every woman and man can be a winner.” 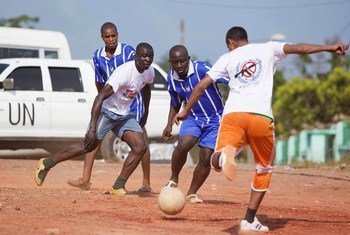 28 May 2013
Secretary-General today called on countries to ensure that all individuals have the right to practice and play sports in a safe environment free of discrimination and prejudice.