18 April 2013
An eight-member grouping of countries working to ensure sustainable development and improve the lives of local communities in South America’s Amazon – home to the world’s largest tropical rainforest – has been hailed as a model for regional cooperation at the tenth session of the United Nations Forum on Forests (UNFF10).

An eight-member grouping of countries working to ensure sustainable development and improve the lives of local communities in South America’s Amazon – home to the world’s largest tropical rainforest – has been hailed as a model for regional cooperation at the tenth session of the United Nations Forum on Forests (UNFF10).

The Amazon Cooperation Treaty Organization (ACTO) is an intergovernmental body aimed at promoting the sustainable development of an area spanning over 7.5 million square kilometers – approximately 40 per cent of the South American continent. It comprises Bolivia, Brazil, Colombia, Ecuador, Guyana, Peru, Suriname and Venezuela.

Jan McAlpine, Director of the Forum’s Secretariat, hailed ACTO as one of the “outstanding examples” of regional cooperation, as well as South-South cooperation, when it comes to the conservation and sustainable management of forests.

She noted that ACTO’s core group is home to the world’s largest tropical forest basin, with 25 per cent of the world’s freshwater resources, “amazing” traditional and indigenous societies, major reserves of timbre and non-timbre forests, and immense ecological, cultural and economic wealth.

Member countries of ACTO, she added, represent the “leaders” in thinking about how the issues of communities in the Amazon need to be addressed.

“ACTO gives us the space, the platform to coordinate action. It is a laboratory where we can build a common vision for sustainable development,” said Ambassador Mario Ruales Carranza of Ecuador, who is also Chair of the Forum’s current session in Istanbul.

The Amazon Basin, he noted, has huge reserves of energy and mineral resources. “When we talk about the Amazon, we are talking about one of the most important ecosystems in the world.” However, being a rich and diverse ecosystem, it also faces many pressures and threats, he added.

ACTO was created in 1995 to strengthen the implementation of the Treaty, which was signed in July 1978. The Treaty covers a range of areas, including forests, water resources, monitoring and management of endangered wild fauna and flora species, indigenous affairs, and tourism.

The body’s Permanent Secretariat was later established in Brasilia, Brazil, in 2002. Its agenda focuses on two main areas: conservation and sustainable use of renewable natural resources; and sustainable development (improving the quality of life for the inhabitants of the Amazon region).

Between 2011 and 2012, member countries implemented activities to monitor forest cover, strengthen community management of forests, identify additional resources for forest preservation, promote awareness among the population of the Amazon, and promote international cooperation to combat illegal logging, according to the Executive Director of ACTO’s Permanent Secretariat.

Mauricio Dorfler noted that the Amazon has the greatest continuous forest coverage in the world, and is home to millions of species as well as over 30 million inhabitants, including approximately 385 indigenous groups.

“The biological and cultural wealth is a comparative advantage for the development of the region,” he said. “But it also highlights the need to reconcile the interests of conservation and sustainable development with benefits for indigenous peoples and local communities.”

He said ACTO has been able, over the past two years, to carry out a number of regional actions. Future challenges for the regional body include consolidating institutional reforms and securing additional funding for the Secretariat; expanding and diversifying sources of cooperation; and giving greater visibility to the work of the organization.

“I want to invite other international cooperation agencies and governments to join this regional effort that shows that Amazon countries together can cope with the challenges that arise,” he stated.

The UN Food and Agriculture Organization (FAO) is currently in the final stages of preparing a memorandum of understanding with ACTO to strengthen collaboration between the two bodies in a number of areas of mutual interest.

“Through this new cooperation agreement with ACTO, FAO is gearing up to support integrated activities for improving production of goods and services in the Amazon region in a sustainable manner, eradicating hunger and reducing poverty and malnutrition, and improving resilience of people and ecosystems,” said FAO Forestry Officer Peter Csoka.

The agreement is expected to be finalized and signed later this year. 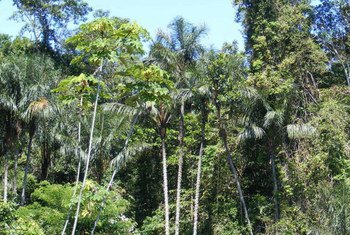 20 December 2011
A United Nations book released today aims to provide people in the developing world with accessible knowledge of Amazon plants and foods they can use to improve their livelihoods.