18 April 2013
Secretary-General Ban Ki-moon and his Special Envoy for Education Gordon Brown are in Washington DC to meet with international government and development partners on how to accelerate progress towards the United Nations Global Education First Initiative to put every child in school, improve the quality of learning, and foster global citizenship by the end of 2015.

Today’s and tomorrow’s events are co-hosted by World Bank President Jim Yong Kim on the margins of the spring meetings of the World Bank and the International Monetary Fund.

“The United Nations stands with Malala and millions of other girls and boys who deserve a quality education. Your support will help us bring equality, and quality, in education,” the Secretary-General said at the Education First Steering Committee meeting.

Malala is the Pakistani schoolgirl who along with friends was shot by the Taliban for attending classes and who Mr. Ban spoke to by Skype earlier this month when he launched the 1,000 Days of Action to reach the eight anti-poverty targets known as the Millennium Development Goals (MDGs).

In 2000, governments meeting in Dakar set six education goals to be met by 2015. One of these, Universal Primary Education, was also set as one of the MDGs, which are to be achieved by the same date.

Today, he thanked the audience of dignitaries for their strong support for the Initiative, and Irina Bokova, the Director-General of the UN Education, Scientific and Cultural Organization (UNESCO) which is hosting the Secretariat of the Initiative.

“We have laid a solid foundation for progress through a highly collaborative process,” Mr. Ban said. “I count on you to identify concrete opportunities to make a difference for education under the umbrella of the Initiative.”

In the Huffington Post, Ms. Bokova wrote that today’s meeting is the “first time that this particular group will have gathered in the same place at the same time to confront the same issue.”

“Top-level political leadership is the driving force for progress, without which none of the conditions above can be met. The meetings in Washington this week must deliver this, and the international community must support governments firmly committed to education in realizing their goals,” Ms. Bokova wrote in her post dated 17 April.

Following the Education First Steering Committee meeting, Mr. Ban is scheduled to take part this afternoon in the Learning for All Ministerial Roundtable with education and finance ministers from eight countries.

The event focuses on Bangladesh, Democratic Republic of Congo, Ethiopia, Haiti, India, Nigeria, Yemen, and South Sudan, which collectively are home to about one-half of the world's out-of-school children - roughly 61 million children.

Mr. Brown this week urged greater funding for national and global efforts to combat gaps in education, noting that “unless a foundation of equal rights is accompanied by resources devoted to reducing inequalities, millions of the marginalized will still be left behind.”

He also wrote that a petition signed by 1 million out-of-school Pakistani children demanding their right to education is to be presented tomorrow to Mr. Ban and Pakistani President Asif Ali Zardari.

Mr. Ban encouraged the Prime Minister to undertake every effort to hold long overdue partial legislative and local elections before the end of the year. He also called on the Government to reach out to all sectors of society in order to forge an urgently needed consensus on the way forward.

Mr. Ban reiterated the UN’s commitment to support Haiti in its fight to eradicate cholera and urged the Government to take appropriate measures on the issue of camp residents at risk of forced eviction. Mr. Ban also called for momentum to eradicate poverty and achieve the MDGs.

Prior to the meeting, Mr. Ban met with US Defense Secretary Chuck Hagel to discuss the situations in Syria, the Democratic People’s Republic of Korea, Mali and Somalia. He expressed appreciation for Mr. Hagel’s leadership and support, according to information provided by Mr. Ban’s spokesperson.

The Secretary-General also expressed his condolences for the victims of the bombing in Boston and his appreciation of US support for Mine Action.

In addition, while in Washington, the Secretary-General spoke by telephone with the Emir of Kuwait, Sheikh Sabah al Ahmad al Jaber Al Sabah, thanking him for Kuwait’s latest contribution for those affected by the humanitarian crisis in Syria and its neighbouring countries. 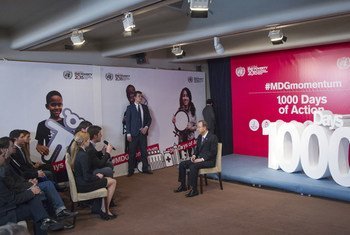 5 April 2013
The United Nations today called for accelerated action in the next 1,000 days from governments, international organizations and civil society groups to reach the eight anti-poverty targets known as the Millennium Development Goals (MDGs) by their deadline at the end of 2015.