UNMAS/Marc Vaillant
UNMAS Mali is training and working with local Malian military and police to clear landmines and unexploded ordinance in the northern part of the country.

22 February 2013
The United Nations is training and working with local Malian military and police to clear landmines and unexploded ordinance in the northern part of the country which pose dangers for local families and have already killed several troops.

“Life cannot really move forward when you have a grenade or a rocket or even an aircraft bomb on your property,” said Charles Frisby of the UN Mine Action Service (UNMAS) in Bamako, the Malian capital.

The unexploded ordinance is believed to be linked to the recent armed conflict, Mr. Frisby said in an interview, adding that there is also historic landmine contamination closer to the border with Algeria predating the intervention.

The goal of the training is to provide technical assistance, equipment and mentoring to the local teams so that they can work independently to assist their communities, Mr. Frisby explained.

In recent weeks, land mine explosions killed at least four Malian soldiers and two civilians in northern Mali, according to media reports.

More than 50 people have been killed or injured as a result of landmines and explosive remnants of war (ERW) between March and mid-December 2012, the UN Children’s Fund (UNICEF) reported.

“It is very likely that this figure is actually much higher,” said UNMAS Programme Officer Marc Vaillant, from Bamako. “The problem is indeed serious.”

The UN High Commissioner for Refugees (UNHCR) has also expressed concern that anti-personnel landmines and unexploded ordnance threaten civilians, as well as aid agencies hoping to help them, in the north, particularly as internally displaced persons and refugees try to return home.

In addition to these threats, “there is a general problem of weapon and ammunition insecurity in Mali,” said Mr. Vaillant. “This includes, for example, insecure ammunition storage areas which could result in unplanned or accidental explosions with potential catastrophic consequences for the people living in their vicinity.”

There is an additional urgency to complete the training now to facilitate the return home for displaced Malian farmers before the start of the planting season in May. The UN Food and Agriculture Organization (FAO) said last week that many of the displaced are farmers, who are living in refugee camps or staying with host families, while other farmers have returned home but have not been able to cultivate their land due to the potential dangers hidden under the soil and because they lack the tools, seeds and animals to begin production.

Fighting between Government forces and Tuareg rebels broke out in northern Mali last January, after which radical Islamists seized control of the area. The conflict uprooted thousands of people and prompted the Malian Government to request military assistance from France to stop the progression of extremist groups.

UNMAS said one of the longer-term goals of the training is to strengthen the good partnership between the UN agency and the Malian security forces.

“By building up this relationship they will give us access to many areas in the country and they will share information with us,” Mr. Frisby said.

Established in 1997 to serve as the Organization’s focal point for mine action, UNMAS collaborates with 13 other UN departments, agencies, programmes and funds to ensure an effective, proactive and coordinated response to the problems of landmines and explosive remnants of war, including cluster munitions. 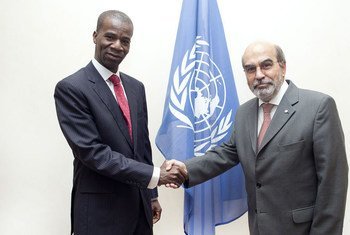 15 February 2013
There is an urgent need to help displaced Malian farmers return to their lands before the start of the planting season in May, the United Nations Food and Agriculture Organization (FAO) said today, stressing that the communities’ resilience must be improved to ensure the agricultural sector’s safety.