“These include cruel punishments, such as amputations, the stoning to death of an unmarried couple, summary executions, recruitment of child soldiers, as well as violations of women’s rights, children’s rights, freedom of expression, the rights to food, health, education, to freedom of religion and belief, and cultural rights,” she said in a report to the Human Rights Council in Geneva.

At least seven men have suffered amputations carried out by the Movement for the Unity of the Jihad in West Africa (MUJAO) and Ansar Dine, including one man who had a hand amputated yesterday for theft, the High Commissioner’s office (OHCHR) said in a news release. Reports suggest that about 30 men accused of a variety of offences are awaiting punishment, possibly including amputations.

In January, fighting between Government forces and Tuareg rebels broke out in northern Mali. The instability and insecurity resulting from the renewed clashes, as well as the proliferation of armed groups in the region and political instability in the wake of a military coup d’état in March, have led over 250,000 Malians to flee to neighbouring countries, with 174,000 Malians estimated to be internally displaced.

In her report, Ms. Pillay outlined a host of human rights abuses and alleged violations of international humanitarian law in northern Mali, calling for urgent action to bring an end to the political instability that has been fuelling the violence.

“I strongly condemn attacks on the civilian population, sexual violence, recruitment of child soldiers and forced displacement, as well as the destruction of Mali’s world heritage sites. Armed groups must abide by human rights and international humanitarian law,” she said.

“I am afraid the humanitarian and human rights situation in the whole of the Sahel region will dangerously deteriorate if the crisis in northern Mali is not urgently addressed.”

Condemning violations of human rights and the destruction of ancient sites in Mali, the Security Council last month encouraged the Economic Community of West Africa (ECOWAS) – working closely with the Malian Transitional authorities, the African Union Commission and countries in the region, with the support of the Secretary-General Ban Ki-moon – to prepare detailed proposals for a stabilization force for the West African country. 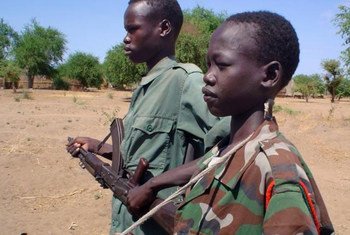 17 August 2012
The United Nations Children’s Fund (UNICEF) today warned of reports that armed groups in northern Mali are increasingly recruiting and using children for military purposes, and called on all parties to keep them out of the way of conflict.