There is an urgent need to help displaced Malian farmers return to their lands before the start of the planting season in May, the United Nations Food and Agriculture Organization (FAO) said today, stressing that the communities’ resilience must be improved to ensure the agricultural sector’s safety.

“As the security situation continues to evolve, FAO, our partner agencies and the international community must do everything we can to help the Government support farmers returning to their land, where it is safe to do so, and get back to growing food,” FAO Director-General José Graziano da Silva said today, following talks with Mali’s Minister for Agriculture, Baba Berthé.

“Mali simply cannot afford to write off the next growing season,” he stressed.

Despite improvements in the security situation in the north, conditions remain precarious with many markets and shops still closed and an estimated 2 million people facing food insecurity across the country due to the pre-existing nutrition crisis brought on by a combination of drought, high grain prices and environmental degradation, FAO said in a news release.

Many of the displaced are farmers, who are living in refugee camps or staying with host families in neighbouring Burkina Faso, Mauritania and Niger. Other smallholders have temporarily relocated to southern Mali, placing strains on local food resources. Other farmers have returned home but have not been able to cultivate their land as they have little or no access to the tools, seeds and animals necessary to begin production.

Currently, many families are relying on household food stocks, but they will be forced to turn to markets as the lean season starts. To get by, they can consume or sell seed stock intended for planting or other farming tools and supplies, said FAO.

UN agencies are also assisting those displaced through food distributions. At a press briefing today in Geneva, the World Food Programme (WFP) said it has sent over 1,000 metric tons of mixed food commodities to the Timbuktu region since it resumed activities in the country earlier this month.

In addition to Timbuktu, the agency has ongoing food distributions for more than 76,000 internally displaced persons (IDPs) in Bamako, Mopti, Ségou, and Kayes regions, and is aiming to deliver emergency food supplies for 564,000 in and around the country. To reach this target, some $45 million is urgently required to purchase supplies that will last up until June.

During their meeting, Mr. Graziano da Silva and Mr. Berthé stressed that in addition to emergency relief, jump-starting local food production ahead of the planting season is a critical need.

FAO has requested nearly $12 million in humanitarian support aimed at helping 490,000 families to cope with the impacts of past droughts and build more resilient agricultural systems through a wide range of farming and livestock support. An additional $10 million is needed to assist new IDPs, returnees and host families in Mali, by providing them with quality seeds, farming tools and supplies and veterinary health services, the agency said.

The two men underlined that restoring security throughout the country will be essential to improving Mali’s food security in the long term.

The conflict has not only affected food security but also the human rights situation. The Office of the High Commissioner for Human Rights (OHCHR) said it would deploy human rights experts to monitor the situation on the ground.

OHCHR spokesperson Cécile Pouilly told reporters in Geneva that three experts have already arrived in the capital to support human rights activities undertaken by the UN Office in Mali (UNOM), and a four-person team will be sent on a fact-finding mission on Sunday.

“We reiterate our call on all parties to the conflict to abide by humanitarian law and international human rights, and to prevent acts of revenge and retaliation,” Ms. Pouilly said. 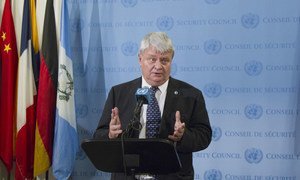 The head of United Nations peacekeeping today highlighted the role being played by “blue helmets” in a variety of hotspots worldwide, including the Democratic Republic of the Congo (DRC) and Sudan, and told journalists that a UN mission in Mali looks increasingly likely.