The United Nations refugee chief today saluted the “historic” entry into force of an Africa-wide treaty – the world’s first – that protects people displaced within their own countries by violence, natural disasters or large-scale development projects.

“Around the world, the number of people forced into displacement within their own countries is growing,” said the UN High Commissioner for Refugees, Antonio Guterres.

“The Kampala Convention puts Africa in a leading position when it comes to having a legal framework for protecting and helping the internally displaced,” he added, using the shorthand name for the instrument, which was adopted by the African Union (AU) in the Ugandan capital in 2009.

By its terms, the African Union Convention for the Protection and Assistance of Internally Displaced Persons in Africa, as the instrument is formally called, is entering into force exactly one month after the ratification by the 15th State, which was Swaziland.

Whereas international conventions exist on behalf of people termed refugees after they have been driven across international borders, there had been no binding protections for internally displaced persons (IDPs).

The treaty is “historic, and not just for Africa,” added Mr. Guterres in a news release from the Office of the UN High Commissioner for Refugees (UNHCR).

Equal praise for the measure came today from the UN Special Rapporteur on the human rights of IDPs, Chaloka Beyani, who said the Convention serves as an “international model” for other regions to follow.

“Today, Africa has achieved a milestone and demonstrated its leadership in addressing one of the most pressing humanitarian issues in the world,” Mr. Beyani said in a news release from the Office of the UN High Commissioner for Human Rights (OHCHR). “I believe that the significance of the Kampala Convention goes beyond Africa.”

While the Convention is applicable and binding only in Africa, IDPs vastly outnumber refugees in the continent – Africa accounts for 10 million of the 26 million people worldwide who were driven from their homes by conflict or human rights-related violence in 2011, while floods and other natural disasters created “at least a further half million,” Mr. Beyani said.

“While precise figures are not yet available, the continent is also impacted by displacement related to slow onset natural disasters, such as desertification and more frequent droughts, associated with the effects of climate change,” he added.

According to UNHCR, the agency provides assistance to almost seven million IDPs in Africa – more than any other continent. The largest internally displaced populations are in Somalia, with 1.36 million IDPs, Sudan with 2.4 million IDPs, and the Democratic Republic of the Congo, where it is estimated that there are more than two million IDPs.

Under the Convention, States have “specific obligations to allocate resources, adopt national policies and strategies, and enact or amend national laws to ensure that displacement is prevented, and that IDPs are protected and supported until they reach a sustainable solution to their displacement,” Mr. Beyani noted.

“If implemented well,” he continued, “it can help States and the African Union address both current and potential future internal displacement related not only to conflict, but also natural disasters and other effects of climate change, development, and even mega trends, such as population growth and rapid urbanization.”

To date, 37 African countries have signed the instrument. The Special Rapporteur said it was vital that the international and donor communities now support African states and civil society in raising awareness and building the capacities to implement the Convention.

He also urged any State that has yet sign or ratify the Convention, to do so, saying it “embodies principles of good governance, respect for human rights and preparedness so necessary to prevent and address the human crisis related to situations of internal displacement.” 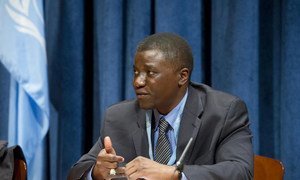 Internal displacement remains one of the world’s most significant human rights and humanitarian challenges, as millions of people continue to be internally displaced every year by conflict, violence, human rights violations, disasters and development projects, a United Nations independent expert said today.