Photo: Albert Gonzalez Farran/UNAMID
This woman and her child sheltered under their cart are among thousands who have fled violence and are now in Al Salam camp for Internally Displaced Persons, South Darfur. (file)
17 April 2018
Migrants and Refugees

More than 40 million people are displaced by conflict and another 25 million annually by disaster ­­– within the borders of their own countries – with children, on average, making up over half those numbers, the United Nations migration agency said Tuesday.

“In 1998, internal displacement was recognized as one of the world’s greatest tragedies and 20 years later, it still is,” said William Lacy Swing, who heads the International Organization for Migration (IOM), marking the twentieth anniversary of the principles that identify the rights of internally displaced persons.

On 17 April 1998, the then-UN Commission on Human Rights took note of the Guiding Principles that identify the rights and guarantees of internally displaced persons, known as IDPs – effectively launching them as a global standard for States and humanitarian actors.

Twenty years later, the footprint of these Principles is clear. They are widely accepted as the standard for protecting and assisting internally displaced people, many States have incorporated them into national legislation, they have inspired regional agreements and they underscore all major work in this area.

“Twenty years on, the number of internally displaced people has nearly doubled due to ongoing new displacements, a lack of solutions for those being left behind in protracted crises and a chronic shortfall of almost 50 per cent of funding needed to meet basic humanitarian needs,” Mr. Swing continued. “The daily tragedy of internal displacement continues for millions.”

As the international community embarks on a year of reflection and action to mark the 20th anniversary, “everyone can and must do more,” he continued.

“More than a humanitarian imperative, it makes good economic sense and is socially advantageous to empower States and populations in their own preparedness, in strengthening their resilience, and in helping to resolve internal displacement,” Mr. Swing said.

“In the spirit of ‘leaving no one behind,’ the momentum behind the Sustainable Development Goals for 2030, greater attention must be focused on addressing the root causes of displacement and reducing risk,” he said.

According to Mr. Swing, when displacement is a life-saving necessity, concerted efforts must minimize its impact and resolve it as quickly as possible with safety and dignity, using means to prevent it from happening again.

“Throughout this year, with partners, we will use the 20th anniversary of the Guiding Principles as an opportunity to do three vital things: raise awareness on the centrality of the Guiding Principles to the assistance and protection of internally displaced people; call on Governments to incorporate the Guiding Principles into their national legislation; and strengthen partnerships that contribute to effective and accountable programming to help realize the untapped positive potential and agency of internally displaced people in their communities, including empowering them in their own responses and giving a platform to their voices,” he concluded. 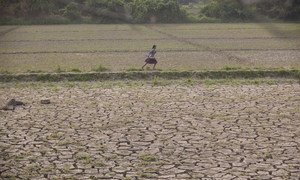