Internal displacement remains one of the world’s most significant human rights and humanitarian challenges, as millions of people continue to be internally displaced every year by conflict, violence, human rights violations, disasters and development projects, a United Nations independent expert said today.

According to the Office of the UN High Commissioner for Refugees (UNHCR), internally displaced people (IDPs) are often wrongly called refugees. Unlike refugees, IDPs have not crossed an international border to find sanctuary but have remained inside their home countries.

Even if they have fled for similar reasons as refugees – such as armed conflict, generalized violence, human rights violations – IDPs legally remain under the protection of their own government, even though that government might be the cause of their flight. As citizens, they retain all of their rights and protection under both human rights and international humanitarian law.

Special Rapporteur Beyani noted that the past two decades have witnessed important advances in the normative framework on the issue of IDPs, as well as in the response to internal displacement by the international community

“However, enormous challenges remain,” he emphasized, underscoring that “mega trends like rapid urbanization, human mobility, population growth and food and water insecurity, together with other factors such as more prevalent natural disasters notably due to the impact of climate change are expected to further increase internal displacement in the future.”

The independent expert said that responses to internal displacement situations will require that States and international and civil society actors be ready to adopt comprehensive frameworks which address all types and stages of internal displacement, address new issues or areas in which responses need to be strengthened, and pay particular attention to prevention and durable solutions strategies.

In his report, Mr. Beyani calls on Governments to adopt, among other things, measures which have been shown to have positive effects, like successful conflict resolution mechanisms implemented, for example, in cases of land disputes; and documentation practices such as in relation to civil status documents – such as birth registrations – and property title registries.

The human rights expert also recommends the implementation of preparedness and early-warning systems, as well as capacity-building measures which enhance the capacity of all levels of Government, in particular local authorities, and of civil society to address internal displacement.

In addition, the Special Rapporteur particularly drew attention to the need to adopt “mechanisms for the meaningful participation of internally displaced persons in decisions which have an impact on their lives.” 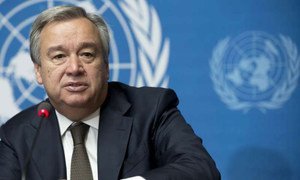 With its financial reserves at zero, the United Nations refugee agency is facing an “unprecedented” combination of crises, its top official warned today as he appealed to the international community to provide the necessary financial support.