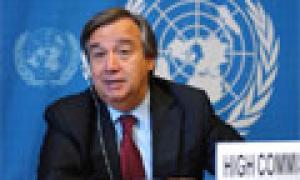 “If you cross a border you become a refugee, you are protected under international law……but if you are internally displaced, you remain under the authority of your own state. And in many circumstances your state, your government, is not part of the solution – it is part of the problem," Mr. Guterres told a news conference after the week-long annual meeting of the agency’s Executive Committee.

"I would like to say how terrible it is for us humanitarian workers not to be able to deliver effective protection to internally displaced people in Darfur because of the prevailing security circumstances and the massive violations of human rights," he said.

As part of its efforts to address the IDP challenge, agency officials noted that UNHCR had helped more than 6,300 displaced people in the Democratic Republic of the Congo (DRC) with basic aid packages in the first 10 days of an expanded assistance programme as the vast African country still struggles with the effects of a six-year civil war.

At the beginning of the year there were an estimated 1.6 IDPs within the DRC and more than 420,000 Congolese refugees in neighbouring countries.

The new approach is being tried out in four pilot countries – Uganda, DRC, Liberia and Somalia – with what Mr. Guterres called “a potentially remarkable success story” developing in Uganda. The DRC aid focused on three villages in eastern Katanga province, where there are an estimated 170,000 IDPs, most now returning home on their own, desperate to get seeds in the ground, only to find devastated communities.

UNHCR and its partners have prioritized eastern Katanga for the next several months but the imminent onset of the rainy season will soon make roads impassable.

The US announcement, made earlier this week, was “first concrete offer” to resolve one of Asia’s most protected refugee situations, said UNHCR spokesperson Jennifer Pagonis in a briefing in Geneva. Canada and Australia, she added, have also expressed interest to take some of the 106,000 Bhutanese who have languished in seven camps in eastern Nepal since the early 1990s.

Meanwhile, the Greek singer and musician George Dalaras was appointed UNHCR Goodwill Ambassador in Athens ceremony Thursday night in recognition of his artistic achievements and significant contribution to the UNHCR over the past five years. He joins others including Barbara Hendricks, Adel Imam, Angelina Jolie, Giorgio Armnai and Julien Clerc, who “use their privileged access to media and influential members of civil society to give voice to refugees,” said a statement.