26 November 2012
Thousands of government representatives, international organizations and civil society members have gathered in the Qatari capital of Doha for the United Nations Climate Change Conference, which kicked off today with a call to build on and implement previously agreed decisions to curb global carbon emissions by the year 2020.

“We have a precious opportunity over the coming days, and we must make full use of it,” said the President of the Conference of the Parties (COP 18), Abdullah bin Hamad Al-Attiyah, on the opening day of the talks, urging conference attendees to stick to agreed timetables and speedily implement already-agreed decisions.

The ten-day meeting brings together the 195 Parties to the UN Framework Convention on Climate Change (UNFCCC), the parent treaty of the 1997 Kyoto Protocol.

Under the Protocol, 37 States – consisting of highly industrialized countries and countries undergoing the process of transition to a market economy – have legally binding emission limitation and reduction commitments. Government delegates at the Conference will, among other goals, try to extend the Kyoto Protocol, which expires at the end of 2012.

In her opening remarks to the Conference, UNFCCC’s Executive Secretary, Christiana Figueres, highlighted recent UN-led reports which point to the urgency of keeping global average temperatures from rising beyond an internationally agreed level of two degrees Celsius, beyond which climate change would have serious impacts.

Analysis published by the World Bank last week shows the world remains at risk of seeing a four degree Celsius rise in temperatures by the end of the century. In its recently-released 2011 Greenhouse Gas Bulletin, the UN World Meteorological Organization (WMO) said greenhouse gas concentration reached a record high last year, while the Emissions Gap Report by the UN Environment Programme (UNEP) warns that the gap between what is needed in terms of emission reductions to stay below two degrees Celsius and what is so far promised by countries is still widening, not decreasing.

Ms. Figueres stressed that countries can still reverse these trends if they decide to act, since the knowledge, technology and policy options needed to curb emissions are already available to them. However, she emphasized that time is running out.

“Expert analysis consistently says that we do have the possibility to keep on track and that to act now is safer and much less costly than to delay,” she said. “In the last three years, policy and action towards a sustainable, clean energy future has been growing faster than ever. But the door is closing fast because the pace and scale of action is simply not yet enough. So Doha must deliver its part in the longer-term solution.”

During a similar gathering in the South African city of Durban last year, 194 UNFCCC parties agreed on a package of decisions – known as the Durban Platform – which include the launch of a protocol or legal instrument that would apply to all members, a second commitment period for the Kyoto Protocol, and the launch of the Green Climate Fund, which was created to help developing nations protect themselves from climate impacts and build their own sustainable futures.

During informal talks in Bangkok, the Thai capital, in September, countries also set specific objectives for the meeting in Doha, which include triggering a new phase of climate action and filling in the gaps in the international policy response to climate change.

The Doha gathering will seek to meet the objectives set forth in another climate change meeting, held in Bali, and plan the work of the Durban Platform. In addition, it will address other issues such as deforestation, agriculture, and development and transfer of technology.

Climate initiatives in developing countries which have improved the lives of the urban poor will also be showcased at the Conference, as well as other innovative approaches to find solutions for climate change. 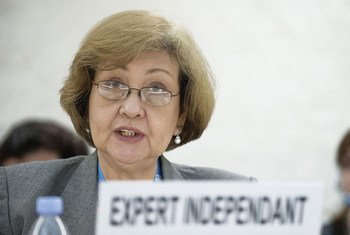 23 November 2012
Ahead of new climate change talks next week, an independent United Nations human rights expert today called on countries to rally behind the idea of helping those less able to deal with the impacts of this global problem.